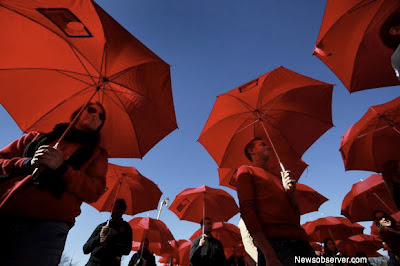 Umbrellas are something that I’ve never really given much thought to.  If it rains, I grab whatever umbrella I can find.  Usually, there is a small one located under the passenger seat in my car, so I've never had to do a lot of planning for rain events   I purchase umbrellas as last minute thoughts in drug stores or airports.  The smaller and cheaper, the better the value to me.


One rainy Tuesday in January, our local fitness center seized a moment of opportunity and advertised the sale of large umbrellas by sending a mass email to its customers.  I found it peculiar that fifteen minutes into the sale, a second email came out notifying everyone that the umbrellas were gone.  I had to wonder if I was missing something.  I had never questioned the ability of the little umbrellas in my possession and had no need to up size.  They seemed to meet the one objective that an umbrella has…keep me dry.  What more could an umbrella offer, I wondered?  Obviously there was a demand for oversized umbrellas and quite possibly, I was not in with the "in" crowd.

A few days after the umbrella rush, a good  friend brought me a large oversized, red umbrella as a gift.  It was big enough to cover a small country and I knew it would never fit under my seat.  The umbrella, when closed, was almost as tall as I am.  Curious about the appeal of a large umbrella, I graciously accepted the gift and waited for the first rain.

As luck would have it, it wasn’t long before a cold winter rain fell.  I pulled into work and reached for the tiny compact yellow umbrella under my seat.  Then I remembered….I had a giant umbrella in the back of my car.  Unable to climb across the seats in a skirt, I jumped out in the rain, raised the back hatch of my car and took out the giant size rain shield.  When I opened it up, I’m certain I heard trumpets sound in the distance.  Of course, it may have just been a large whooshing sound from the displacement of air in the vicinity of the now open, gigantic umbrella.  It must have been four feet wide and was quite possibly visible from space.  I made my way to the office door and discovered that we, the umbrella and I, were too wide to enter.  My hands were full and as I spilled coffee down my shirt, I attempted to close this beastly umbrella.  I obviously didn’t click it all the way shut because as I entered the door, it flew open, crashing into the door frame, tearing the canopy away from one of the umbrella support rods, leaving me lodged in the doorway with a metal spear pointing towards anyone attempting to leave the building.   By the time I got to the office, I was soaking wet and covered in coffee.  I still wasn’t seeing the joy in a large umbrella.

A few days later, it rained again.  I wasn’t going to get out in the rain this time, so I climbed across three rows of seats in my car and got my big red umbrella.  I opened it up and noticed two of the tips were exposed and were quite sharp.  I cautiously entered the building sideways this time, in an attempt to fit through the door, when I nearly took out the eye of an innocent bystander.  Again, nobody was seeing the joy in this red bayonet like umbrella.   Later that day, as I returned to my car, I decided to keep the umbrella up front and save myself from climbing over seats.  I managed to poke a hole in the leather and make a nice tear in my seat from the pointy tips.  I cursed my large umbrella and tossed it to the back once again. It was so tall, I knocked out my center light and managed to spear myself in the face.


Later that day, my kids got in the car, eyed the giant toy in the back seat and said, "Hey, what is this?"  Before I could say, "Don't open that!" it flew open stabbing every passenger in the car.  I’ve concluded that this thing is more like a weapon and could maim entire families at once.  While I'm certain it will displace a large amount of rainwater, it can also displace eyeballs, front teeth, and steaming cups of coffee from their cup holders.   I've packed away the giant beast and will return to the safety and security of my tiny yellow umbrella hidden underneath my seat, thus proving the theory that good things do still come in small packages.
Posted by Family Feathers Author at 7:49 PM

Still laughing after reading this because you see I too have had a big red umbrella with a similar story! I arrived at work one moringing and reached for the unbrella that was in the back seat because you see it is just too big to keep under the front seat which is where I normally keep my umbrellas. I opened the door to open the unbrella and quickly realized that it would not open with me in the car so I thought do I get out of the car in the rain to open this darn thing? I jumped out and quickly opened it but then when I tried to reach back into the car to get my belongings it was just too big to allow me to do so....so I leaned it on the top of the car while I gather my belongings and began my trip to the door once I got to the door it was too big for me to go thru the door so once again I had to stand in the rain while I closed that darn thing. I have retired that big red unbrella unless some can explain how to use that darn thing!