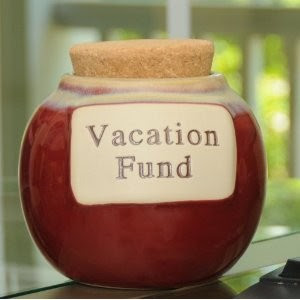 My mother has always advocated hiding away little piles of money for a rainy day or possibly a Disney vacation.  Her vessel of choice is a small, white bucket that she places loose change in.  After retiring, she began making and selling gourmet cupcakes to friends and family.   The money earned from cupcake sales was placed in the bucket to wait for that rainy day, when it was needed.  I, too, have a bucket, but its contents have dwindled down to a partially filled tube of lip gloss and some quarters thrown in from doing laundry.   My bucket quickly became a community bucket where everyone reached for lunch money, cigarette money, movie money and more.   I realized that location is everything and that I might need to secure a different bucket and place it in an undisclosed location.

Around Thanksgiving, my mother asked me to count her bucket money (a favorite hobby of hers) and as I passed a thousand dollars and still had stacks of twenties to go, I realized that people must really like cupcakes.   She suggested we pool our bucket money together and take a cruise.   This was a grand plan, except for the fact that lip gloss and quarters won’t actually secure passage on a real ship. It was time for a better plan. The solution… The Vacation Fund.

This cute ceramic container came with dreams of Hawaiian vacations and trips to exotic lands.  It was written on the outside, clear as day…. “Vacation Fund”.  How could I go wrong?  While the first container I used was clearly labeled “Folgers Dark Roast Coffee”, I can see how it was easily mistaken for everyone else’s funds.  I hid my new vacation fund container at the top of my china cabinet and tossed fives and twenties in as the days passed.  Unable to see the contents in the jar, I knew it must be turning into quite the little nest egg.

Cruise tickets were purchased with cupcake money and my vacation fund would be used to pay for the extras.   After comparing notes with other sea faring families, I discovered what those extras might actually be.  One family spent $600 on pictures and another had an $800 bar bill.  I can understand the bar expense if I had just learned that I owed $600 for pictures.    Excursions are extra and my mother insists that my daughter swim with the sharks.  I’ve explained to her how that particular activity is usually free and not actually a tourist favorite– it’s swimming with the dolphins that costs $200 a person.  Travel to and from the port is an additional expense and will include two vehicles on a nine hour drive with several stops at Cracker Barrel Old Country Store and Restaurant where we all become nostalgic and buy toys from our youth.  My son will procure a kazoo that will eventually be tossed out the window as we pass a semi and he has driven me to madness with kazoo tunes.  My daughter will have some dancing monkey or paddle ball that will fly back and forth from three rows back, hitting me in the head and breaking my sunglasses.  The cost for one trip to Cracker Barrel can be expensive when it includes emergency Optometric support.   All must be covered by the vacation fund.  "Extras" will also include several stops at gas stations that are more like mini-amusement parks than fueling stops.  We can easily drop $100 on gas, beef jerky, unnaturally colored drink products and foot long strands of red licorice that will be hanging from our mouths before we hit the highway.

Afraid to calculate the true cost of the extras, I decided to bring down the vacation fund jar and see just what size vacation it would be.  Surely those twenties had added up over the months.  In an almost ceremonial fashion, we gathered at the table and allowed my daughter to count the funds.  She pulled out a one dollar bill and I was certain it must have just been placed there on top of the stack of twenties.  Then came a five dollar bill.  With one giant smile, she retrieved the first of the twenties.  Unfortunately, it was also the last of the twenties.  My vacation fund had $26!  My daughter cheered at our new found wealth.  My mother laughed.  It looked like we would be swimming with the sharks! 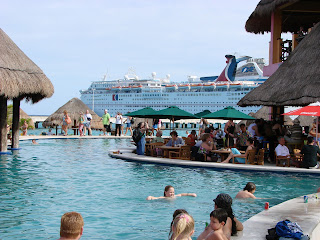 I secretly thanked God for the savings account at the Credit Union that could not be touched by those seeking theater tickets, nicotine or "Two Ball Screw Ball" frozen treats from the ice cream man.   I gathered  my funds that would enable me to head south to lounge poolside.  I instructed the children not to smile at anyone’s camera but mine.   If the ship photographer comes along, they were instructed to instantly make scary faces.  This plan would save me some money and allow the children to swim with docile mammals while their mother sits on the shore sipping tropical goodness through a straw.  It’s a good plan, I think!

Anonymous said…
Sounds heavenly! Have one of those tropical drinks for me! By the way I gave up on one of those vacation jars many years ago!
March 19, 2012 at 1:53 PM