Hope Comes in Many Forms 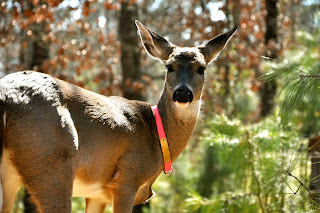 The story of Randi Hope is one that must be told.  I've referred to Randi several times throughout my writings, but one must know the real story of how Randi Hope came to be.  Most families have a pet or two - normally these are cats or dogs, even fish or birds.  Then there are those that live on the outskirts of civilization that have their own private zoos with exotic creatures that both excite and frighten children all at the same time.  My family is caught somewhere between those two ends of the spectrum.   We are a normal family, in a normal house, with a normal life.  But tucked away inside these facades of normalcy are multiple pairs of little loving eyes hanging upside down from a carefully placed limb, lounging about on the roof or even running full circles on a tiny plastic wheel deep within my daughter's bedroom.

We never set out with any goals to procure these creatures... they simply find us.  If there is an injured animal anywhere around, its internal GPS will lead it right to my back door.    The most unlikely arrival was a chicken that had fallen off of a Tyson Truck on it's way to certain demise.  A neighborhood child found the wounded fowl and brought it straight to the Brodnax house.  I stopped asking why years ago.  The little white chicken lived with our daylight challenged rooster and two ducks for almost a year until he disappeared one night without a sound.  We have earned a reputation of being able to nurse injured critters back to health.  It's not because of our mad veterinary skills or our desire to run a farm, it's because of my huband's genuine love of animals and our daughter who holds and loves and soothes every creature she comes across.  One touch from her candy coated fingers and pain seems to disappear and healing begins.  It is much like living with Snow White.  I looked out the window one day to see her walking down the street with her dog, followed by two curious cats, and a white tail deer..... Randi Hope.

Randi was one of those fallen animals that made its way into our hearts.    Almost two years ago, Randi's mother was running free and wild when she jumped a fence and broke her back.  My husband was immediately called to come and help, for the young mother deer writhed in pain on the ground in front of a growing group of onlookers.   Not wanting the children to see what was coming next, my husband attempted to load the deer into his truck until he was stopped by a policeman with orders to put the deer down.  He pulled out his gun and shot the deer, much to the surprise of those standing near.  My husband asked the much needed question, "Did you know she was pregnant?!?" and proceeded to open the now deceased deer up in an attempt to rescue the life that remained within.  With the help of a friend who happened to be an ambulance driver, they removed two baby fawns.  After mouth to mouth resuscitation and a conveniently located oxygen line, one of the two  babies survived.  The crowd cheered with delight and a young woman asked if they would name the deer after her son since it was his birthday.  Thus.... Randy was born. Forgetting that he had his own child at home that named pets before she even got them,  my husband was met with the loving eyes of his daughter who exclaimed, "Oh Daddy, can we name her after me?!?"  Compromising and sharing middle names, Randi Hope was now officially a part of our family.  She was lovingly placed on a warm blanket under a heat lamp in the corner of our living room where I was certain she would remain for weeks like a baby in an incubator.  Surprisingly, it seems a baby deer can use those spindly legs and walk upright in a matter of hours. In a few short days, they are able to jump over the couch and stand by your bedside nibbling on the ends of your hair while you sleep.  Who knew?  It took only days to move Randi to the big outdoors where she was free to roam deep into the woods and mingle and play little deer games.  The problem with this was the fact that Randy had arrived by C-Section and unbeknownst to us all, had imprinted on my husband and now believed, without a shadow of a doubt, that she was a charming retired fisherman.  She had no desire to join those rowdy deer in the wood. She preferred lounging on the patio furniture eating grapes and sneaking a taste of whiskey when she could.   Her life was good!   Randi roamed the neighborhood and ate the neighbor's hostas and impatiens.  A freshly planted bed of flowers looked like a snack tray laid out for her to enjoy.

Randi grew and her spots faded and she turned into a full grown doe.  One Spring day, Randi was not found lounging by the pool in her usual spot.  Several days passed and she was nowhere to be found.  She had been run away by stray dogs off to an early start of deer hunting.  Luckily, she wore a pink collar with our cell phone numbers on it and she was spotted curled up in a woman's carport miles from our home.  My husband went to get her and coaxed her into the cab of his truck.  I would have paid to have seen the next scene.   He lights a cigarette, starts the engine and about the time he shifts into drive, this loving deer goes mad and demands to exit the vehicle.  At this particular time, the only exit was the driver's window that had been lowered to allow the smoke to exit.  Smoke and a full grown deer lept from the truck window bounding on the pavement, leaving my husband uncertain what bodily injuries he had just sustained.  That is when he called me to come and help.  When I arrive on the scene he explains his plan to climb into the back of my SUV with the deer in his lap.  He will hold her until we get home.  I knew then, as I do now, that it would never play out like he imagined.   With everyone safely in the vehicle I begin to move forward.  As the car shifted into second gear, the deer began to buck and jump and it was a blur or hooves and hands and fur and hair.  I screamed that if she came over the back seat I was jumping out and they could crash together.  The battle was on and he held her down as she slammed his head against the ceiling, the side panels, the headrests and more.   It was the longest eight mile drive of my life.   Randi and my husband both survived the ride home and fell out onto the front yard when the hatch was opened.   I walked away in shock.  The deer took to it's lounge chair and my husband lay in the front yard as the bruising set in.   It didn't matter to him.  His love of that deer outweighed any cranial hermoraging that might be setting in.  To most people, this would seem unusual.  I'm certain our neighbors never viewed this as out of the ordinary for the Brodnax family.

Randi has been with us now over two years.   Her colors change with the seasons and she has overcome many a challenge.  As a fawn, she ate a roll or telephone wire and came close to death.  She was later shot while in the woods and came home with a shattered knee.  Against all advice to put her down, we allowed nature to run it's course and after months of limping and constant attention from my husband,  one day she sprang up on all four and her knee was good as new.  She  now lives in a very large fenced in area with two predator dogs that she calls brothers.  They chase each other, love on each other and most definitely respect each other.    The large dogs are fully aware of the power of a hoof to the head and the deer knows the strength in the jaws of those dogs.  Neither has ever hurt another.   She no longer roams the neighborhood, but is allowed out of her fenced area to taste the honeysuckle on particularly warm Spring days.  She has been known to sneak in the back door on occasion and realizes her mistake as those spindly legs hit the slick hard floor of the kitchen.   Wondering what she was looking for, we allowed her to enter to see where she was going.  She nosed around a bit and found her way to that tiny spot in the living room, once warmed by a heat lamp.  Love grew from that spot and Randi remembered it well.     We both smiled and knew what was next.... me with that crazed look yelling "Get out of my house!"  Off she skated on all fours in a mad attempt to exit the house.   She is a good girl.  She is one of us and she knows she is family.