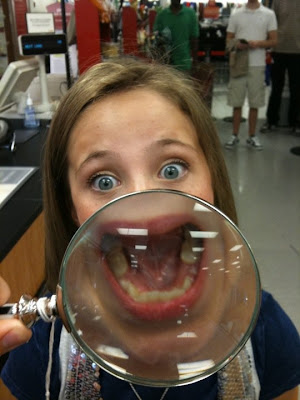 While shopping for linens and boring my children to tears, they managed to find creative things to occupy their time.   Who knew of the fun that was to be had at the 90% off clearance table. I was happy going about my business of comparing thread counts and searching for alternative down filling when I received this photo on my phone.  Now positive that the children were still safe in the store and cavity free, I continued with my shopping while they magnified each other's body parts and suited up for mock battle with barbecue utensils and colanders in aisle three.   I have to admit that I had forgotten how much fun a big magnifying glass can be.   I remember as a child that we would sit on the sidewalk with bits of paper and a magnifying glass trying to make fire from the sun.  We were never actually successful in this endeavor, but I think we may have blinded a few neighborhood children participating in this activity.  I should point out that trying to look at the sun is never a good thing to do.  Attempting it with a giant magnifying glass is even worse.  "Hey, look how big the sun is now...aGhhhhhhhh."   The fun always ended about the time your best friend's retinas were burned to a sizzly crisp.    The simplest things have always made the greatest toys, no matter what generation you are from.  In the 70's, we were surrounded by Schwinn bicycles, EZ Bake Ovens and the complete cast of Star Trek Miniatures and Barbie and Friends.   We had giant Tinker Toys (what I wouldn't give for those now) Lincoln Logs and enough Legos to build a city. Thousands of dollars were spent on toys to entertain us and yet you could find us all piled in the basement sticking flashlights to our skin in hopes of seeing blood and bones shining through.  Some of the best toys of my life were found down in our basement.  We had a wet bar there where we would make up lizard juice and serve it to nervous guests who were secretly hoping it was really only Kool-Aid.   Behind the bar was a cash box full of play money and as we collected revenue from our bug juice bar, we would hide it from the make believe robbers who would arrive on scene as soon as we turned out all the lights.  Many a child was traumatized in the dark of our basement as we attacked the robbers with giant Tinker Toys and dusty erasers. This was life before Atari and it was wonderfully fun.   My children, who were born into the Apple Generation, are usually wired with ear phones, cables, cellular devices and the ability to stream the latest unreleased movies.  One would assume that these items would come in handy while waiting for their mother in the linen store.   But no, a magnifying glass and a set of Barbecue Utensils provides much more fun.  While the other bored children were standing in the corner of Linens and Things playing Angry Bird and sending mass texts to their friends announcing that... "I'm Bored",  my kids were shooting zoom photos of the insides of their mouths and uploading them for the world to see.  Oddly, there seems to be a fair amount of people who enjoy viewing such as proven by the 24 comments that followed these pictures.  Case in point... Just months ago, my daughter was doing a perfect handstand on my coffee table.  Her dismount was textbook until she crash landed on the corner of a chair sending us immediately to the Emergency Room for stitches.  Instead of crying in the back seat of the car, she was shooting play by play photos of the injury and sharing it with her friends.  Before we could arrive at the Emergency Room, she already had flowers and balloons waiting at the house and 14 comments about how cool the wound looked.  If only she would have had a giant magnifying glass and a flashlight.... that would have been icing on the cake!
Posted by Family Feathers Author at 9:02 PM