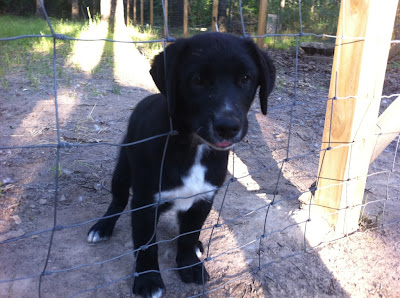 The term "Puppy Bus" conjures up awful thoughts of a large worn out bus traveling at ridiculous speeds, full of unwanted puppies, headed for the island of misfit toys or someplace worse.  I have to admit, though, that it is anything but that.  The first time I heard this term was when I asked my neighbor to help me find a home for a puppy I had.  It was never my intention to raise puppies but after a pregnant dog was abandoned at our our home, puppies found their way into our hearts. The puppy bus was a good mechanism for the last puppy to make his way home.

We had given shelter to a friend who was down on his luck.  He arrived with his suitcase and his dog.  Unfortunately, our friend left, but the dog didn't.   She stayed with us as we all hoped her master would return for her.  Nobody knew she was pregnant until the day we came home to discover seven puppies in the yard.  "Were we blind?" I had to think to myself.  How did we miss this????  We are now down to one last puppy who desperately needs a home with a yard and kids and bacon flavored treats at the end of the day.  I advertised him on Facebook to my 268 friends and their kids and found that my friend count instantly dropped as I was being deleted left and right.

I tried an online Pet Finding service and was inundated with disturbing messages from people assuring me that ..."God will bless me" and that "...their daughter was waiting to hold my adorable pet who would surely help her heal after the tragedy. " The messages all seemed rather generic as if it didn't matter if my "adorable pet" was a dog or a cat or two headed newt.  While I admit that I would like to see the look on their daughter's face as she took hold of the two headed newt, I felt certain this would never come to fruition.  I know that there is no daughter and the only tragedy is the dog fighting ring or snake food pit that they failed to mention.  These people scare me.

Luckily, I have a neighbor who has dedicated her life to rescuing dogs.  She works with a rescue group out of New England and through her connections she has found my dog a possible adoptive family.  To get there... he will board The Puppy Bus.  He will simply need his second set of shots, to be neutered and possibly get a mani/pedi before he is in with the "in" crowd and allowed passage on The Puppy Bus.  While not a carrier found on Travelocity, it seems that this Mystery Machine Animal Carrier comes through every other Friday and takes puppies north to a new life.  I instantly envisioned The Green Mile or a long ride down death row to a pound somewhere, but my friend assures me that this is a reputable service that screens applicants and places dogs in loving homes.

Every day on my way to work I pass the Tyson Chicken truck and look into the eyes of chickens bound for their demise. I can only pray that the Chicken Truck is nothing like The Puppy Bus.  My puppy is a beautiful little boy that can never have the look in his eyes as a Tyson Chicken.    While I know this is the right thing to do and I trust my friend 100%, images of Rudolph's journey to the island of misfit toys fill my mind.  That and that weird little elf that wanted to be a dentist.  Between the pet finder messages, terrified chicken eyes and the cast out boy dentist, my mind is filled with scary thoughts that could impact on my little puppy.  All this convinces me more and more that I need to take to the mountains and build a hideaway like The Wilderness Family because people just frighten me at times.  I could have all the pets I want there and my little black puppy, Midnight, would have a good home. Of course, I could never catch and kill my own food so I would die out there in the Wilderness with my Foxfire books and failed attempt at building a shelter for all of us.  It is because of such that I will delete those crazy people's email, place faith in The Puppy Bus, and find a new route to work that is far away from the Tyson plant.   I have to trust that Midnight will board The Puppy Bus and have a pleasant journey to northern lands where he will be met with hugs and kisses from a real child waiting for "my adorable pet."