Everyone Knows Top Lockers Are The Best 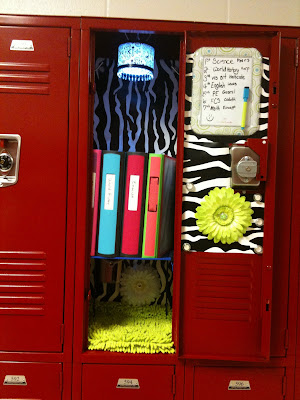 It should have been a pretty good sign to me that something was seriously wrong with my priorities as my daughter and I rolled up into the school parking lot on a Saturday in August to carpet and wallpaper her locker.  I was comforted to know I wasn't the only mom there rigging up lighting and shelving systems.  I knew we had crossed a line somewhere, but the smiles on our daughter's faces made it all worthwhile.   There is some kind of social status associated with having a top locker and my 4' 5" child had managed to win the luck of the draw.  It was difficult installing the tiny motion sensor lamp at the top of the locker and a set of scaffolding would have come in quite handy, but I knew that might have labeled me as "the mom who went too far."  I settled for standing on top of a stack of copy paper while we measured, papered, and completed our interior decorating.  I'm not sure that my first apartment looked quite as good!   Half way into the project we realized that there was simply no room for books and school supplies and wondered if we could rent the locker next to us.   Something told me that the answer to that question would be a clear "no."   My daughter decided she could just carry her books from class to class, thus defeating the entire reason for having a locker, but.... who could mess up a small studio locker such as this!

I have to admit that the apple doesn't fall far from the tree and there must be some kind of genetic imbalance that causes us to do these things. When my son was in fourth grade, he was running a small illegal vending operation out of his locker.  I was so proud!  He found a tiny vending machine that happened to fit inside of his locker and he sold candy bars and chocolates for bargain prices.   He, too, opted to tote his books around on his back so that he could collect his profits each day from his tiny snack bar.  It was the motion sensor light that got him in trouble when it came on one dark night as the janitor passed by. Much to his surprise, the janitor used his master key to open the locker only to find that it was not a bomb, but a brilliant small business venture operated by a ten year old boy.  The light and the vending operation were quickly removed and the books were returned to their rightful place.

We have always had this problem of using lockers for inappropriate purposes, but prime real estate is prime real estate and when you have a top locker, it just can't be wasted on school books and binders. Of course, the problem we have with school supplies is the large amount we have to be stored.  My daughter treats the school supply list like a lost book of the Bible and takes it quite seriously. We are not allowed to deviate from it and must procure every item listed, no matter if it fails to pass the common sense test.  This year, all seven teachers listed the need for two boxes of 48 pencils.  I realize they simply want to make sure students have enough pencils to get through the day, but we were not going to leave the store without 14 boxes of 48 pencils.  We now own 672 pencils.  The same rule applied for each item listed and after I spent $200 on school supplies for one child, it became quite apparent that she would also need a small pack-mule to carry all of these items.  We also have 120 colored pencils, 64 markers, five packs of Sharpies,  7 two inch binders that total a width larger than her locker, gym clothes, sack lunch and more.  I need to rent out an entire bay of lockers to accommodate all of these supplies. I know that after the first few days she'll consolidate everything into one large binder and she'll scrap the six hundred pencils for two cool mechanical pencils that can only be found at some gas station two hours away where her friend got hers.   The true cost of school supplies should be around $30 and does not include self contained lighting systems, enough pencils to supply a small mission school or wall to wall carpet.  If this madness continues, we may find we have to live in that top locker.
Posted by Family Feathers Author at 6:23 PM 1 comment:

It's All About Family 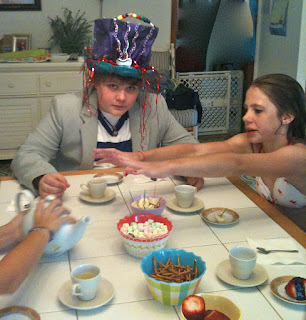 Family roots are important to me and for the past year I have spent $19.99 a month on ancestry.com tracing our lineage back to the year 254 A.D.  It was exciting to find that I am the 23rd great-granddaughter of Dagobert, King of the Franks. Unfortunately I discovered that I am not the granddaughter of the Queen of Franks, but rather the King's mistress that lived down the way. I have my grandfather's eyes, but not his wife's. As I dug deeper, I found that I have roots tying back to the Visigoths that challenged the Roman Empire. It goes without saying that they were not successful. That would be like Fiji declaring war on the United States.  Not a wise strategic move. My 53rd fur wearing, sword swinging, great grandpappy was replaced by a boy king from the same tribe, probably one night over roasted boar at the community table.  "Really Aoric, could you not see that we were outnumbered? Let's get Mikey to rule...   He'll do it."    I guess bloodline wasn't the determining factor for reign, but rather who was smart enough to get in and out of Rome with few casualties and perhaps a couple of souvenirs from the Colosseum.

After I traced back 58 generations, I wanted to see what my heritage looked like on paper and found that you must spend another $129 for the Family Tree Maker software that uploads your data and puts it in nice little charts.   As I printed my pedigree, I discovered two of me coming from different branches of my tree.   Immediate panic set in as I realized there may be a mistake and perhaps I wasn't the daughter of a king.  I checked my notes and found that people must have been lonely around 1200 A.D. as they traded old wives for new ones.  I can only assume the village was small  and there were few women to choose from because my grandmother of many years ago was also my aunt.  If they had only known that this would mess up my Family Tree maker template and create a division in my tree that would take me months to straighten out.   God knew what he was doing when he said not to be adulteress.  It would later require additional html code to plot my lineage.  Selfish lovers!    I was starting to see a pattern of fighting on the wrong side and sleeping in the wrong bed.  I moved back to modern times where multiple spouses weren't common and the branches of my tree weren't uncomfortably close to one another.

While I know it is not a normal reaction, I was deeply saddened when I ran across a newspaper article describing how my great, great grandfather had hung himself in jail after wielding an axe at his family in a drunken bout of rage at the turn of the century.   I had never heard this story before and wondered if  some things so filled with sadness should just remain buried away.   I felt bad for this man whom I know possessed my DNA.   He was a German immigrant with thirteen children who worked in the brickyards of the north.  His final words to the jail keeper, just hours before his death, were spoken in fluent German.... "I can take no more..."     My heart skipped a beat and I felt a loss for a man and his family that I never knew.... a man that is responsible for my being here today.   While generations come and go, happiness and pain are common threads that run deep in all families.

A litmus test of mine that I run regularly with my children is to ask them how they will describe their childhood once they are grown and I am gone.  I want to make sure their story is true and wonderful and involves no swinging axes or battle insertions on the wrong country.  It should be about happiness, good books, silly tea parties with funny hats, competitive sports, family cookouts, bedtime prayers and more.  It is my hope that the branches to come on my family tree grow in the right direction and connect to media uploads of well families and good stories.   Perhaps one day my 33rd great granddaughter will find me and say, "Wow - my grandmother loved life - Check out that cool hat."
Posted by Family Feathers Author at 9:44 AM No comments: