The Making of Nerds and Other School Projects 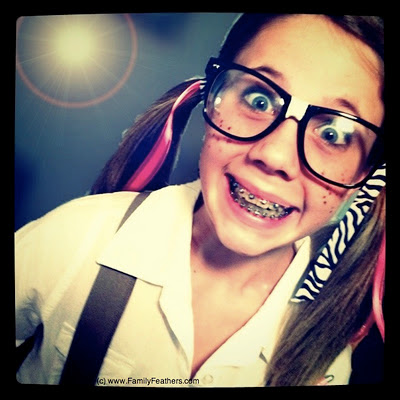 It is normally close to bedtime when we discover that our kids have forgotten to make that scaled model of DNA or an interactive mobile of the planets aligning in preparation for some magnetic shift certain to change the world as we know it.  Because of this, I keep a supply of poster board, hot glue and assorted candy that I can quickly craft into chromosomes, solar systems and  working models of pulley and lever systems should I need to do so in a moment’s notice.    I also keep an assortment of costumes on hand for Book Parade day so we can dress as just about any Newberry Award winning character should we need to.
It was an exceptionally long day, recently, when my daughter informed me that tomorrow was “Nerd Day” at school and we would need a complete Nerd wardrobe.  Since this is the child with 42 pairs of shoes and a closet full of designer jeans, this was going to be a more difficult project.   Thanks to a 24 hour Wal-Mart and items from my Book parade collection, she transformed herself into an adorable “nerdy” girl.   Something inside of me tugged at me, though, as I wondered if this was really an appropriate activity.  It’s probably not so fun for the kids that already appear a bit nerdy and I was worried for them.   We had stepped upon the fine line between having fun and being rude.  I finally decided my over-analysis was a useless effort and just let my kid go with the school activity. The next day was sports day and that was followed by school color day.  Both of these were easy to pull off.    I kept my glue gun handy should I need to hot glue some candy ribbons into smooth endoplasmic reticulum, but it looked like Jr. High might be easier than elementary school and my crafting days may be numbered.
When my son reached Jr. High, he and his friend had to build a model of a roller coaster.  I was so excited as I mapped out plans for piping and tubing and tiny mechanical lifts until my son informed me he was doing this on his own.  My bubble burst as I realized I had to let go of control.  I handed him my glue gun, which has never been the same since, and sent him on his way.   I asked for project review at key milestones such as 60 and 90% completion and my son gave me that look that said, “let go.”    I saw him take his father’s drill to school and wondered how they were going to build this without a safety briefing and a proper assortment of drill bits.  Alas… they finished their project and I would get to see it on Project night.
When I arrived, there were roller coasters in the shapes of snakes and little coaster cars shot out of the eyes with such mechanical precision it made your head spin.  Another coaster dived under water amongst a complete ecosystem of fish and plants.  They failed to incorporate in oxygen, so the fish were all dead, but the idea was grand.  My son and his friend’s roller coaster did not have the flare of the others so they tacked on a home-made sign that said Vegas and duct taped his sister’s Barbie to a support pole.  She donned a tiny grey duct tape miniskirt and tube top and her feet and hands were bound to the pole.  I stood there in shock as the other mothers walked by quietly shaking their heads in disapproval.   Next to us, was a small crowd awed by the coaster built by a child whose parent was obviously a mechanical engineer.  I glanced over to see Barbie hanging from a strut and knew that one day soon, I would be asked again to help with school projects.  I can build coasters, nerds, life forms and more.   It is good to know you are needed!