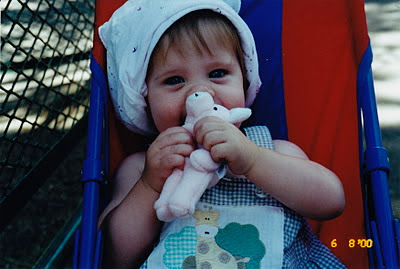 It was 1975 and as I walked out of elementary school for the last time, my grandparents were waiting for me in the parking lot in a Midnight Blue Lincoln Continental with a full size Airstream trailer hitched to the back.  It was summer and we were off to see America.  My cousin Ramonna, who is several years younger than I am, sat in the oversized back seat with me, as our feet stuck straight out in front of us and we headed West.   The car smelled of new leather, Old Spice and expensive perfume.    I was young enough that many of the memories have since faded, but I can still clearly see the wild storms in Kansas and the never ending highway that carried us to Colorado.

We landed at Garden of the Gods Campground in mid June only to be met by an unseasonable snowfall.  We jumped in the big car, with trailer still attached, and headed to K-Mart where my grandparents bought us all winter clothes to replace the suitcase full of summer wear we had packed.  Hoping now that it was actually fashionable in the 70s, I remember leaving the store in a lime green pair of bell bottom pants with a giant cat embroidered on the leg.  The finishing touch was the white pom pom on the tail that gave it a 3-D effect.  Gosh, I loved those pants!

The next morning my grandparents would take us to “The North Pole,” an amusement park at the base of Pike's Peak.  It was a magical place with summer snow all around.  This trip would not be complete, however, without a journey to the top of the mountain.   Forty years later, I have to recommend that one do this without a 30 foot trailer dragging behind you.   At the age of 11, I had no clue to the danger we were in or the small heart attack that my grandfather certainly must have been facing as we climbed higher and higher on narrow roads with steep drops off the side and no place to turn around.   These were the days before break stations, runaway vehicle ramps and nitroglycerin in the glove box.   I only remember the amusement park and the view from the top and both were absolutely wonderful.

Years later, I took my own family to Colorado and we ventured down to the Springs to see “The North Pole.”   My daughter was one year old and looked like a tiny Babushka doll in her headscarf intentionally donned to protect her ears from a late summer wind.   My son was five and wanted to ride some spinning reindeer sleigh ride.  I had forgotten about the Disney Tea Cups of Death not intended for any child with motion sickness and should have remembered to stay away from such rides.  The first time the reindeer passed us in its large circular course, I noticed my son’s color had faded.  The second time he flew by, he was looking a bit green.  On the third rotation, his head was down and I was leaping over reindeer to signal the operator to let the boy off the ride.  He had turned green and was in the full throws of motion sickness.

We headed to the car and decided a slow ride to the top of Pike’s Peak was what we needed to relax.  I had no idea how slow that ride would actually be as we stopped every few miles for me to hold a sick child on the side of the road and curse those spinning reindeer.  As we got closer to the top I saw the dangerous two lane gravel strips of road with steep drops hundreds of feet below that we had to travel.  I thought back to the Lincoln and the Airstream trailer and wondered how worse this road had to have been forty years earlier.   It was bad enough now and I felt the energy of my grandfather’s courage that still remained on the mountain.  We continued our periodic stops on the side of the road and I wished that the car smelled like new leather, Old Spice and perfume, but it did not.  It was more of a sweaty child, cotton candy, carbonated soda and dust smell that filled our car. 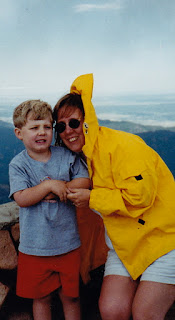 We eventually made it to the top and as we pulled into the parking lot a large dark cloud floated overhead and we found ourselves in a miniautre snowstorm.  We stood there in our shorts as the snow pounded down on us.   I had to smile as I found myself standing where I had once stood before and secretly wished that I now had that pair of lime green cat pants purchased for events such as this one.   I forced everyone from the car so we could take a picture. My son sported a post traumatic sweaty pre-hypothermia look.  The Babushka baby gave me that look of total discomfort and disgust and my husband stood in the background desperately trying to light a cigarette in the storm force winds.   I wished that my grandfather was there with his silver trailer and we could have climbed inside to take shelter from the storm.  I imagine he was one of the few who has actually pulled a small house to the top of Pike’s Peak and I felt honored to be a part of that.  Perhaps forty years from now my children will take this same path in their eco-friendly suburban utility vehicle and remember the flying reindeer and unseasonable snow storm.  My daughter won’t know why, but she’ll remember the warmth of a scarf on her head and the smell of cotton candy.  My son will breath in the cool mountain air and remember down deep somewhere how wonderful the air felt as we stood on the side of the road catching our breath and stilling the world for just a moment in time.