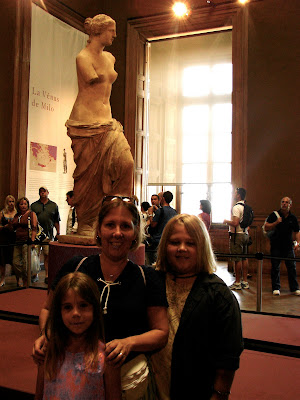 I have pointed out on prior occasions, that I always seem to miss the Kodak moments of life with my head turned the wrong way looking for some missing item or lost treasure when great things happen around me.  This weekend, I realized that I have been so close to many great things and yet, I really must go back and revisit these things to fully appreciate them.  Case in point...   I was in a hotel this past weekend, blowing my son's hair dry with the tiny hotel hair dryer.  He was spinning around in the desk chair making the task quite difficult when the hair dryer made an awful noise like a fan blade had come loose.  I told my son to stop spinning and sit still so we could finish before the blade flew out and chopped an ear off leaving him to look like Van Gogh.. or was it Picasso.  Suddenly I wasn't sure which artist cut his ear off and I realized this was sad since I had stood right in front of both of their works and should know better.    I’ve been exposed to some of the world’s greatest artists, and yet I’ve missed so much.
Years ago, I took my children to the Louvre in Paris to see great art.  My daughter was much too young at the age of six to be drug on a European tour, but I wasn't leaving her behind and my son wanted to go.   When we arrived at the museum, we discovered that the tour guide forgot our tickets and we spent most of our morning waiting to get in.  By the time we gained entrance to the museum, we had 30 minutes left in our morning to soak in all we could possibly see.  We mapped out a quick plan to see the Mona Lisa, Venus DeMilo and the Crown Jewels.... all in thirty minutes.   We ran past the world’s largest collection of artwork all demanding our attention and yet we had no time to give.   We followed the map to the Mona Lisa and found a very small painting in a large room full of tourists.  There were hundreds of people clamoring forward trying to catch a glimpse.  We made our way towards the front of the line, still unable to see the Mona Lisa , when a museum worker in a gold jacket lifted the red rope that separated the tourists from the masterpiece and asked my kids to come under the barrier.  They were about to be nose to nose with one of the greatest paintings ever made.  My daughter was only six and I knew she didn’t understand the significance of this and I whispered, “Go - Remember this.”  I wanted to her to take in all the awe of what she was about to see and yet I knew down deep that a giant movie poster of Spongebob Squarepants or a rainbow unicorn would bring her so much more pleasure.   I hope that she remembers.  She was inches from greatness and while I never got the same view, I was thrilled that she did.
On the same trip,  we toured the Vatican.  I figured out early in our tour that I would not have the luxury of wearing the headset that explained everything in English to me.  I would be busy talking to my daughter about why there wasn't a pool or playground around.  Again, I walked past greatness, never to really know what I was seeing.  I remember a kind lady tapped me on my shoulder and said, "You should take a picture of that - It's where Constantine is buried."     I had walked right by, never knowing, so I now have a picture of his crypt from a distance as we continued forward.   We finally arrived at the Sistine Chapel where I knew I would stand in awe amongst the hundreds of other tourists gazing up at the beautiful frescoes on the ceiling painted by Michelangelo, himself.   I was in a room where great popes and rulers had once stood underneath the world's greatest masterpiece.  Just as I looked up in great wonder, a tiny hand tugged at mine and a teary eyed little girl stood there in sadness because she had lost her favorite lime green pony tail holder.  It had come out somewhere in the chapel and we had to find it.   Her tears flowed and I scoured the floor looking through the sea of stranger's feet trying to find my child's pony.  We covered every square inch of the chapel and I now know more about the floor of the Sistine chapel than most know about the ceiling,  We never found the hairpiece, I never got to use my headset and I followed the tour guide right out of the chapel trying to catch backwards glimpses of the greatness overhead that I had missed.
So while I have been exposed to great artists works and great moments,  I may need to revisit them at some point in my life to fully appreciate them.  I wouldn't trade any of them though for the tiny hand that reaches for mine when she needs my help and my focus is diverted for more important things like lost ponies and wiping away tears.   I may get Van Gogh and Picasso mixed up and I may have flown right past an armless Venus di Milo, but I know that all the greatness I ever really needed was traveling right there beside me at full speed.  We have missed some details, but our experiences together are worth more than any painting or sculpture ever will be.