The Bus Is Almost Full 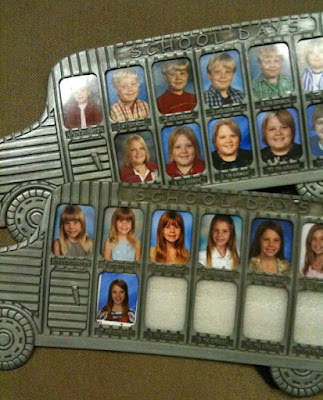 The day my children were born, I began snapping photos, left and right, like some crazy woman.  With my first born, digital cameras weren't available, so I have a million Sears Portrait photos of my son with teddy bears, giants Christmas ornaments and large plastic numbers one through five.   I have enough photo sheets to wallpaper all the bedrooms in my house.  By the time my daughter arrived, we had purchased a digital camera.  She has many of the same photos as my son, but they are versions I took at home with kittens, puppies, and giant bows.  Having the digital original allowed me to only print what I needed, so I don't have quite as many prints of her.   Select sizes were placed in frames and put on display for all to see.
While shopping for frames for all of my photos, I ran across two picture frames that looked like buses.  There was room in the bus to put your child's photo for each year of school, Kindergarten through twelfth grade.  My children were nowhere near school age, so there was no concern about the bus ever filling up, because that would certainly take a hundred years.   I thought it would be a cool thing to have a photographic progression of them aging.  I never realized that it was simply a countdown for their leaving the nest.
Lo and behold, I blinked, and the first day of Kindergarten rolled around.  As a young mom, I was so excited when picture day came and I could put the first picture on that bus.  My son was officially on the bus to graduation and I had twelve more empty spaces to fill. This could be fun, I thought.
He continued to fill up the bus as my daughter took her place in the front seat of her bus...  a brunette beauty with bangs in Mary Janes and matching cropped pants and top.   The riders on the bus continued to board on an annual basis until my son reached about ninth grade.  He pointed out that when the bus filled up, he would drive away.  That was the last picture I put in the buses.  A subconscious denial kept me from selecting new photos of the kids to put in their escape vehicles.  My son reminded me that I couldn't stop the bus from leaving and someday I would have to put those photos in.
After two years of procrastination, and recognizing that college was around the corner, I finally broke down and loaded more photos on the bus.  I held my son's bus up and pointed out that there was only one seat left.  I suggested we put a picture of me there, but we both knew that would never work.  I know after next year, he will drive away and it breaks my heart.  My daughter's bus still has five more seats left on it, so time is on my side.   If we were in a third world country, I could just keep stacking photos of him on top of the bus and he would never leave.  Unfortunately, his bus is almost full and the pre-trip checks are already in play.  I hope that it won't carry him too far away and that it remembers the way home.  I would hate to have to get on the bus with my daughter and go and get him.  Luckily, he knows I'm the kind of mom that could easily be seen coming around the corner in a giant bus, hunting him down if he stays away too long.
As I ponder where these two buses will go, I realize I should get a picture of a sporty, two seater Jaguar and put it just below the buses. When the kids finish college, I can drop my own photo in the sports car.  It will make the bus leaving a little easier to watch.
Posted by Family Feathers Author at 7:07 PM