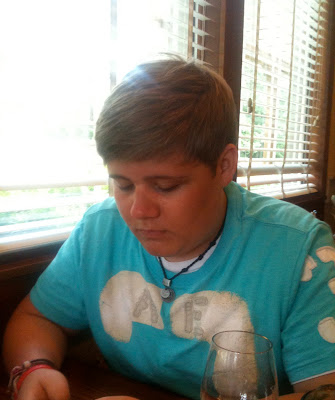 My son has been helping me create a video for a going away party at work.  He has crazy, good editing skills and my job is to sit in the background, providing snacks and chilled drinks while he works his madness with the photos I have provided.  He zips through screens, clicking and copying and selecting computer options I didn't even know exist.  While choosing the font for the narrative, we ran across an old friend... the "Wingdings" font of Microsoft Word.  I've never really understood what this series of odd symbols was used for.  While it has been rumored to hide anti-semitic messages and 911 references, I highly doubt that anyone is going to take the time to type out a cryptic message of terror in Microsoft word using wingdings and curly font. That being said, I have been guilty of using a few symbols in my text messages of fear sent to my children when they don't answer their cell phones.  "Call Your Mother NOW" is usually followed with a frowny face, an exclamation point and a man in a bathtub.  For the life of me, I can't figure out how anyone could find a way to tuck that icon into a message, so I choose to use it every chance I get.  I will follow it with "grrrrr" and a heart symbol to reassure them that while I'm mad, I still love them.  They will certainly be in therapy over all of this by the time they are thirty.

Back to the video....after selecting the perfect font, background music and precise layout of pictures, I chilled his un-sweet tea to the proper temperature, dropped a Russian tea cake in his mouth, spun around in the office chair a few more times and stopped suddenly when he announced the most disturbing thing.. "I think I'm supposed to be in traffic court today?"  What!?!    Two thoughts instantly came to mind. How could anyone wait until the day of court to wonder if it is their day in court, and, secondly....Did I send in the deposit for our beach rental? I realize that the second thought was random, but that is how one's brain works after they have twirled around in a chair for twenty minutes and are suddenly thrown against the proverbial brick wall with incomprehensible information.

I gathered my family, none of whom wanted to miss Joey's day in court, and headed out like a herd of turtles to traffic court. My family is incapable of moving quickly as a group, as someone has always forgotten something or we need to make stops for water, gas, or possibly chicken on a stick.  We made it to the courthouse with minutes to spare.  Knowing my family's curse of being unable to navigate through a security check point with ease, we cleared our pockets of cell phones, electronic gaming devices, pocket knives and nail files and entered the courthouse.  Of course, I was the one was brought down in shame as the security guard snatched my purse from the x-ray machine and shoved his arm into the depths of mystery that is the contents of my purse.  I stood frozen, not knowing what contraband I might be toting unaware, as he pulled out my government cell phone. Dang... I had forgotten about my second phone.  After giving me that look of disgust, he rummaged through a gathering of lip glosses, coupons, pony tail holders and feminine hygiene products to ensure I wasn't trying to bring in anything deadly.   I smiled kindly, as he invaded my privacy, and I remembered the dried up lizard I had pulled out of my son's pocket years ago while doing laundry. I wished it was in my purse even though none of this was his fault.

We made our way to the courtroom completely unaware that there were two courtrooms... one for criminal court and one for traffic court. And yes... we took our seats in criminal court, not knowing that the judge would soon be looking for the missing teenager two doors down. While waiting for the court to start, my daughter was demonstrating her one handed knot tying skills with pony tail holders. It was an impressive trick and I, of course, had to learn this skill immediately.  It appears I didn't have the finger dexterity of a child and pony tail holders were flying across the courtroom as they shot off of my fingertips.  Court was not in session yet, so, it was simply pre-court entertainment for the other traffic offenders, or so we thought.   I now understand why the man in front of us sat huddled over, head in hands, in great despair.  It wasn't because of flying pony tail holders, the small family circus I travel with or the threat of a traffic violation.  He was there for something much more serious.

The judge entered and it was the mother of one of my son's good friends.  We settled back in false hope that this might go our way.  The first person called to the stand had a last name that began with "A." This could work out nicely, as  we should be out early if they were moving in alphabetical order.  Unfortunately, the next move was completely unexpected and left us all with our mouths open, chins on the floor.  After Mr. "A" was carted off to jail, the bailiff brought in the chain gang!  My son's eyes were wide as saucers and my daughter sat frozen to her seat.  The group moved in unison steps as the chains that bound their arms and legs clinked across the courtroom.  I looked at my son and said, "See, that's what happens if you miss court."   He found no humor in that statement and was still in a mild state of shock. We listened to the tails of larceny, burglary and battery and I wondered where failure to yield came into play in this courtroom of non-moving violations.    As the criminals were escorted away, one by one, the room cleared and I assumed that our friend's mother, the judge, was possibly holding my son's case for last so she could visit with him privately and say hello.  I was clearly wrong as a new bailiff approached and informed us we were wanted in the courtroom next door.  We gathered our pony tail holders and sunken spirits from the floor and moved as a group to the next courtroom, clearly marked "Traffic Court."  I didn't feel too bad about our mistake as I knew our courtroom had been much more entertaining than what we were about to enter.  We opened the courtroom doors and I prayed that my daughter would not ask, once again, for all to hear, if this was Judge Judy's court.  The room was packed and we were forced to move to the front of the courtroom, making it clear to all that we were late, loud, and probably going down in flames soon. We took our seats quietly trying to disappear into the crowd. Suddenly, I heard my name being called in a whisper from three rows back.  More attention was the last thing we needed.  Surely, I didn't know somebody in court.  It was a former employee of mine and he wanted to let me know that they had already called my son's name. I thanked him and told him our story in few words and hand gestures, pointing to the other courtroom.  What I needed was a Wingding message that said, "We're idiots - The judge is going to kill us."

Did you really de-code this?  Good for you!

It wasn't long before my son took his place in front of the judge and I have to say that he could not have been any kinder to my child.  Joey walked up with head high, shoulders back, took responsibility for his actions and followed every statement with "sir."  "Yes sir, No sir." While I could not hear everything that was said, I could make out a discussion about where my child would go to college and about bringing those new found skills back to our community some day. While I had new found skills of tying a knot with one hand, I'm certain I should not bring those back to the courtroom ever.

As we headed out the doors of the correct court, I heard the judge yell at the next person before him, "Stand Up Straight When I'm Talking To You."  I breathed a sigh of relief, said goodbye to the security guard and headed in the other direction than the pour souls in stripes and chains.  While everyone is entitled to their day in court, I know that I would prefer my day elsewhere and am thankful for the good children that I am blessed with.

(Thank you Katie A for asking for another story)


Posted by Family Feathers Author at 11:57 AM