The Magical Lure of The Emerald Coast 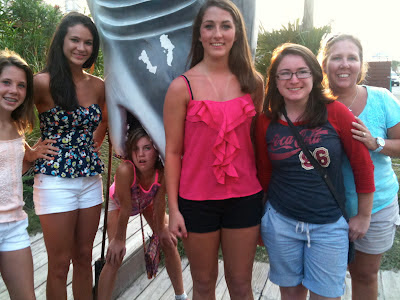 There are some places in this world that are so wonderful that it's worth driving fourteen hours for, even if three of those hours are in bumper to bumper traffic moving at five miles an hour or less. This year's travel challenge is the Emerald Coast on the Fourth of July Holiday.  Families from all over the southeast made their pilgrimage to the Florida beaches for that traditional four o'clock check-in at one of the thousands of condos on the water.  Ours is situated between Destin and Panama City Beach somewhere east of pricey Seaside and west of Barrett Square, with it's cobblestone streets and picture perfect families on bikes.

On one of our many summer trips to Florida, I longed to be that family of happy cyclists and we loaded up five bicycles in the back of a truck that followed my car all the way to the beach.  As we took to the streets with no helmets on, I was quick to interpret the looks from fellow cyclists that let me know I was endangering my children who wore no protective gear, other than sunscreen.  We were from the country where kids drove all terrain vehicles before they could walk.  I think their heads were in much more danger then.  We made it about 200 feet from the condo when I began to hear the first complaint that it was much too hot for this.  I clung to that image of us rolling down the sidewalk with the breeze in our hair and happiness in our hearts.  We pushed on a few blocks more and stopped for t-shirts and water.  It was fast approaching a hundred degrees and nobody wanted to be peddling a bike around.  As we dripped sweat and gasped for air, I realized it was not happiness in our hearts, but possibly a blockage and lack of oxygen. I led us home, before one of us, most likely me, had a stroke.  We arrived safely back to the condo and never touched a bicycle again.  We now play a game called, "What's the cyclist really thinking?" as we drive past them in our air-conditioned vehicle headed somewhere in the cool.

After coming to terms with who we really are, our condo selection fits us perfectly, now.  We are a few steps from the beach and a few steps from the pool, giving us immediate access to water activities all day long. In between the two, we have a balcony where we can sip tropical drinks and watch the waves roll in, my favorite vacation activity of all.  My bicycle is 600 miles away and I could not be happier. 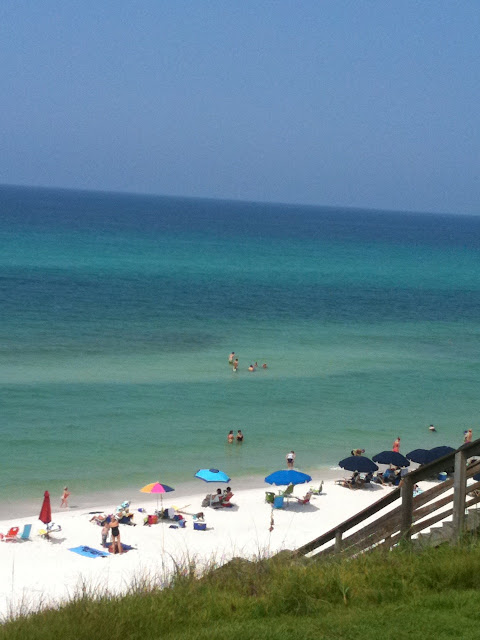 I remember leaving my grandparents home, just after midnight, to make that long journey to the coast in a station wagon with my mother, father, brother and cousins.  There was a special place in the back of the vehicle where two tiny seats faced sideways. If you were small enough and could squeeze your feet between the suitcases and the Coleman cooler, you could make this a comfy spot for most of the ride, as long as you weren't prone to car sickness, vertigo, seizures, or simply bothered by seeing the country fly past you at 70 miles an hour.  You saw nothing coming and nothing going for ten hours, simply a blur of farmland and rice fields flying past in a continuous sweep of color that the eyes could not follow for too long.

While parts of the trip have faded from memory, I have snapshots in my mind of my family standing on the balcony of our hotel, happy and complete for the time being.   I remember our friend Bennie Hughes arriving in his brand new corvette, looking like Burt Reynolds. He was much like the favorite uncle who made everything wonderful and fun. Sandwiches and Kool-Aid were the menu choices for lunch and it didn't get any better. We learned that a non-sailing family should learn the difference in a shark and a dolphin before renting a catamaran and taking to the open water.  We moved as a large group and got air-brush t-shirts, went deep sea fishing, rode the rides at the Miracle Strip and went to Spinnakers nightclub, where I saw my first glimpse of a bar. The people in those memories are important to me and most have gone their separate ways now.   As I sit on the beach today and think back to the fun that has been found here, I wonder where these people from my past have all gone and hope that they still love the beach as much as I do.  It was magical then and still holds that same gift for those who are brave enough to face the traffic and the masses and make their way here, whether it's in a corvette, an air-conditioned SUV, or a truck full of bikes. 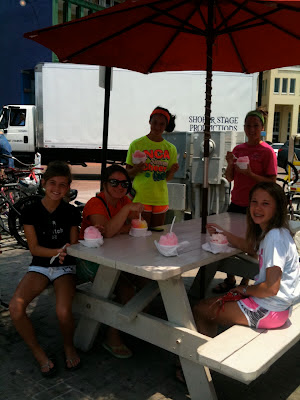 My children have the same love of the water as I do and our trips to the beach are just as great as a 1970's trip to the Sandpiper Beacon. Instead of grape Kool-aid, it is a pink-lemonade snow cone from Frost Bites that we crave. We still haven't learned to correctly identify dark objects in the water and confuse dolphins with sharks and seaweed with sting rays.  We continue to venture out into the open water, paddling our foam boards, knowing we look like seals and hoping the sharks fed early.  The beach and the water call to us, often from 600 miles away. I hope that one day my children take their place on the sand, early in the morning, with a cup of coffee in hand, nobody around, look east and then look west and smile as those snapshots in their mind come back one after another. I'm certain some of the faces in their photos will be gone, just as they are in mine, but I hope they understand the treasure that is held in those memories and know that it is greater than any loss can ever take away from them.


Panama City Beach
1970's
Not my family... but certainly could have been.
Someone, smarter than I, thought to catch it on film.