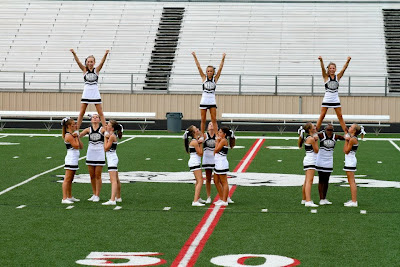 As a hurricane nears ours shores and a faint, cool breeze blows the remnants of summer away, the Fall football season is upon us and with that comes football games, cheerleaders, and a strong need for a professional organizer and a personal dry cleaner armed with a "Tide To Go" stick.  Let me explain... 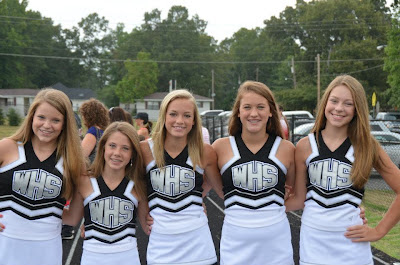 My daughter is one of those cheerleaders and great effort has gone into preparations for our Fall kick off event known as "Dog Days" where kids are given their first opportunity to take to the football field and show the world their skills.   After selling hundreds of dollars worth of ads and bulldog magnets, securing just the right outfits with matching bows, t-shirts and rain gear, and paying for private lessons with Cirque du Soleil to perfect a tumbling pass on the sidelines, we were ready for Dog Days and all the joy that comes with it.

The afternoon of the event, my child was missing in action as she and her father were tooling around town running errands, sipping on snow cones and enjoying their afternoon without a care in the world.  They are much alike and operate in their own timezone, not shared with any other people that I know. Like a crazy woman, I tracked them down and redirected them back to our house so we could get ready and go.  In minutes, she was dressed, packed and out the door.

As we arrived at the field, my daughter hopped out of the car with great excitement.  Before I could exit the vehicle, she had rounded the hood and was coming at me like a freight train with that look on her face of complete panic.  I've seen this look many times before and knew that it meant we had either forgotten something vitally important, I had just run over a kitten, or that I was about to be introduced to    some type of problem that would require precision time management skills and a race to some store twenty miles away.

This time, it was simply a bow we had forgotten, and I raced home to retrieve the black and silver hair accessory that went with her crisp, white uniform.  I had five minutes to drive ten miles and decided it would be wise to entertain moving closer to the school and save myself a nervous breakdown sure to be drawn out slowly over the next five years of school. Back at the stadium again, the girls in white, ran off to practice and we took our places in the stands armed with a variety of cameras, zoom lenses and mobile upload devices.   It was sweltering hot as it had been all summer and the occasional hint of a breeze was a welcome relief. We had been in drought conditions for the past three months and I would like to state that the odds of locating a puddle of mud were a million to one, unless you were my child and you were dressed in a bright white, shiny uniform with matching bow.  It didn't take long before I spied her coming at me, once again, like a steaming freight train, seeking me out in the midst of a crowd, wearing that same look of panic.  I took a deep breath and waited to see what impossible task was about to be thrown at me in hopes of a quick resolution.  I heard the panic in her voice and sensed a tear in her eye as she called out "Mom!"    She looked perfectly fine, so I couldn't imagine what could be wrong, until she turned around and it was clear to all that she was covered in mud from the bottom of her skirt to her neckline.  "How?" is all I could muster up.  It had been over a hundred degrees for months.  There was no water anywhere around.  And yet, somehow, she had managed to tumble right into the only mud puddle within 500 miles.  With a precision landing, her feet stuck firmly in the small body of watery goo that instantly shot mud splatters straight up the backside of her crisp, clean uniform.

With no time to race home, I pulled her into the nearest restroom, stripped her of her muddy white uniform, hand-washed it in the sink, beat it against my own jeans to try to dry it as much as I could and sent her back out on the field.  No one would know that her uniform was soaking wet. Unfortunately, the same could not be said for me, as I took my place back in the stands looking like I had been hosed down from my waist to my knees.   Eventually, Dog Days began and as the band marched around the field and the teams took their places, I looked out and saw both of my children, all of their friends and a sea of proud parents, none of whom would be focused on my child's wet uniform.  I settled back and settled down and enjoyed the show!

Before the first game is upon us, I know that we must come up with a better plan that places both of us in the same timezone with a pre-flight checklist we should review before leaving the house.  I cannot continue to race against traffic or take over public restrooms without prematurely aging and knocking off years of my life.  It's time to truly get in the game. 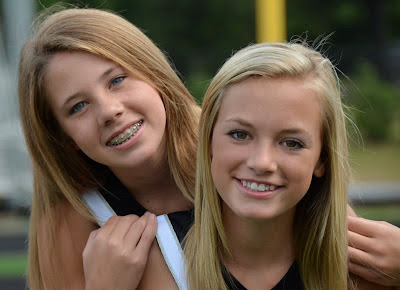