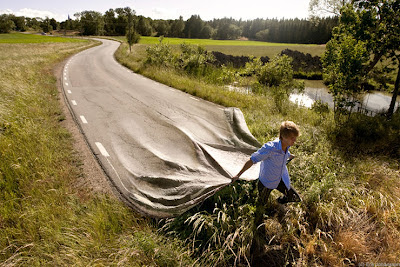 The road to the city was once a four lane interstate that deteriorated over the years under the weight of big trucks.  While I was not invited to the Highway Department planning meeting, I learned late that the road would be replaced.  One day the highway was there and then suddenly it wasn't.  Giant equipment moved in like something out of a Dr. Seuss book and broke concrete, stirred dust, ripped out the highway and carried it away.  It seemed to happen overnight.  I still question where one carries off an entire interstate to, but I'm certain there is a mountain of concrete around here somewhere.

The southbound lanes are now shared for traffic coming and going and all of us can watch as the other side of the highway is carried away and is now being rebuilt.  It is a strange sight to see miles of dirt where once a highway stood.  But the most amazing thing is the giant machine they brought in, that we have named The Highway Maker.  It appears that as this monster machine slowly moves forward, it spits out a freshly poured thick slab of interstate.  Much like the EZ Bake oven, there is nothing on one side and yet magically, a perfect product rolls out the opposite side of the machine.   It's nothing short of magical. Insistent that we capture a photo of this giant wonder, I pressured my children to hang out of the car windows with cell phones in hand as I drove precariously close to a concrete retainer wall that separated us from oncoming death, screaming, "Did you get it? Did you get it?" My son gave it his best, but we were unable to capture a decent photo of this machine in its full glory as we drove by at reduced speeds in single file.  Had we taken the picture below, it would be proof that we had made a wrong turn and were currently driving in Portugal.


I am incredibly intrigued with the idea of being able to drive a machine that spits out a new road to anywhere.  The power of such a tool is endless. I picture Dr. Seuss's Sneeches with stars on their bellies driving The Highway Maker over mountains and through deserts and possibly across oceans at very high rates of speed. Before long, we would have a spaghetti bowl of highways and byways and exits and more.   People would be coming and going and crossing each other's path until it was a giant maze of confusion. The road making would never cease because the Highway Maker, properly known as the Slipform Paver, is wider than the road itself, so it obviously would have to keep making road to continue forward to anywhere. It's mind boggling when you think about it. 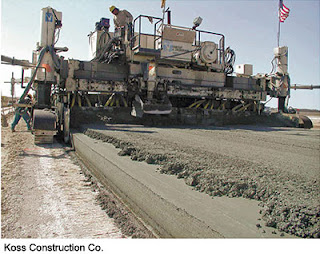 With half the highway gone, we now drive on the left and share lanes with oncoming traffic.  I have always been happy knowing that we drive on the right.  I find comfort in that simple rule.  Upset that constant and things begin to get strange.  My daughter is most concerned about this as she has always had some internal formula for determining if traffic is coming or going and while we've found no logic in her assessment of travel patterns, she is undoubtedly certain which side is coming and which side is going. On our way to the city, on the wrong side of the highway, she declared that we were "going."  The people on the other side of the concrete wall were "coming."  I asked if we would be coming or going when we were on the other side and she was quick to let me know that we would obviously be going. It leaves me bumfuzzled.

The Highway Maker is definitely going and will be in a perpetual state of "going" as it lays down an endless road of concrete to new and wondrous places.  Trapped by the nature of it's own existence, it will never be coming or returning, as a road once traveled is all the Highway Maker will ever know.

I wish for just an hour or two that my kids and I could jump aboard this fantastic machine, sit under the cool umbrella, shift the gears, raise the flag, mold some concrete, sip on a cool drink and lay down a new path at 105 feet per minute.  It would be empowering!

Thank you Eric for letting me use your very cool photo! -m

Posted by Family Feathers Author at 7:00 PM No comments: