Reach Out and Touch the World 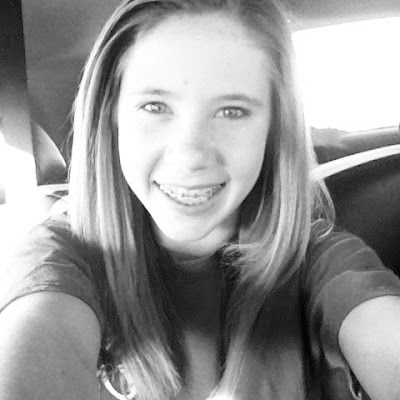 It was around 11:00 at night when I discovered my daughter still awake in her bed with string cheese hanging from her mouth as she "Face-Timed" her friend who lives four hours away.  While she was having fun streaming video of the stringy dairy product hanging from her mouth, she informed me that she had forgotten to do her Science homework on DNA and that she needed me to wash a pair of jeans. This instantly told me I would be up early in the morning washing clothes and googling up things such as how many chromosones a cat has.  I had forgotten about the small dog living in my laundry room who had just been neutered and the fact that he would need my attention too.   My morning schedule was already being stretched to the hilt and I hadn't even gone to bed yet.  Oddly, I happen to have a representation of the building blocks of life made out of Starburst and Licorice and I hoped we could work it into her Science homework to save us a little time in the morning. 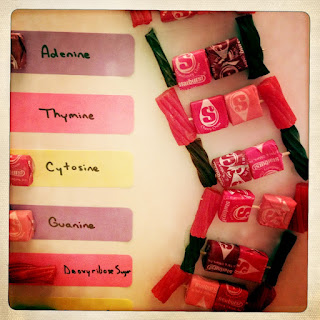 While mornings are stressful, I am thankful that my son operates on autopilot and needs little assistance getting off to school.  He is wonderfully independent yet still allows me to drop a pop-tart crust and a Zrytec in his mouth as he hurries out the door. He'll take a big swig from the milk jug, squirt a jet of Hershy's syrup in his mouth and shake his head to stir.  This is far from the healthy breakfast I wish he was having, but it does get him off to school with something in his stomach and all histamine-induced wheal responses temporarily held at bay.  I am next out the door and some time after, my daughter and husband will make their way out.

On my ride to work this morning, I played with my new phone that allows me to do hands free texting.  I've discovered a whole new world of communication that has shaved minutes off of my schedule once occupied with useless small motor movement for texting with two thumbs. I sent messages to everyone I know even if I had nothing to say.  My son finally sent me a message that said, "I'm at school - stop texting me."  I was truly a kid with a new toy.

Realizing that everyone was just as busy as I, I gave up on my unsolicited messaging and began asking random questions to my personal phone assistant who just happened to  know the chromosomal count of a cat. Still asking useless questions, I discovered there are two other people with my name and realized about that time that I probably needed real people to talk to.  I could text the other two Melissa Bs without lifting a finger, but they might find that odd.  I believe I would.

I do wonder what we did before we traveled with Smart Phones and small computers in our pockets that allow us to reach out and touch the world.   Oh yes - we reached out and touched the world.  We talked to people eye to eye. We read golf magazines in doctor's waiting rooms and we walked around ignorant of the number of chromosones a cat has. Our phone bills were $42 instead of $342.  We used pay phones in bad parts of town and the germs on the handset didn't kill us.  We talked to strangers in gas stations as we asked for directions and we had real conversations over dinner.  We went to bed after prayers and a story and we didn't stream images of food products in our mouths. Don't get me wrong, I love modern technology, but while it is intended to make the world smaller, I believe it just may be separating us from one another as we operate behind a world of text, screens and unnecessary messages.   My children will text each other from one room away instead of getting up and walking into the other room to speak.  After completing this week's Science review on DNA, I can see where we are headed for genetic adaptations that will result in a society full of footless, big eyed, thumbless people that know nothing about golf, prayers or being lost in the middle of nowhere.  I only pray that our body types won't change so that we are as tall as we are wide just so we will always fit properly in 12" x 12" photos as Instagram is now the standard for a generation of people who take and post perfectly square pictures of everything they see, do or eat.

As I write this, I realize that I should just put all the phones away at bedtime and everyone could get some sleep.  Our bodies could relax and no genetic adaptations would be required.  No images of half eaten food products would be sent from my house and mornings would welcome a family full of rested individuals prepared for the day.

Nicely told story again! It seems that multiple times a day one should just put all distractions away, relax and recharge old school style. Like taking a nap in kindergarten, one's body and mind can benefit from moments sublimely quiet.