Sleeping With One Eye Open 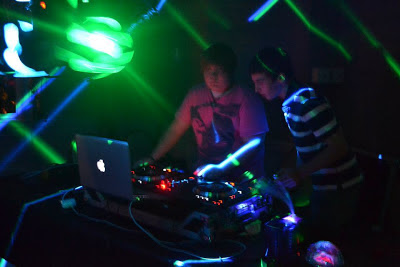 My son is a Disk Jockey and he works later than most kids his age because of the nature of his business.  Of course, he only has to to work twice a month to make the same money I once made at seventeen flipping hamburgers and wearing that horrible "Wendy's" blue cotton uniform that looked much like a French maid with its puffy sleeves and low cut neckline.  I try hard to stay awake to make sure my son returns home safely, but at those late hours I am known to cat nap while he is out.  I have mulitple alarms set on my phone to go off every hour on the hour so I can stalk him properly and make sure he isn't late and lying in a ravine somewhere.   I lie on the couch and doze in and out with one eye open and one hand on my phone.  My son knows the rule that he must wake me upon return so I can turn off the alarms and then move into a regular sleep pattern.   The problem with this is that my cognitive reasoning is dulled after going in and out of sleep several times and I tend to agree with most anything said to me as my body aches to return to sleep.  My children have discovered this flaw in my plan and have used it to their benefit.

I recently discovered my children's brilliant scheming when my daughter was going to be out later than normal and I made the same deal with her.  "Make sure you wake me up when you get home so I won't worry."  My children don't understand how I could be worrying if I'm asleep, but real sleep is far from what I go through while waiting for them to return.  My son shook his head and continued on with his dinner.  I overheard him tell my daughter that all she had to do was tell me the next morning that she did wake me and I would never know the difference! Gads!   Had I failed as a parent!

Truth be told,  I suppose I've done something right because I do have good kids and I don't worry too terribly much.  I know they have been placed in safe situations and pray they will return at the correct time.  But this new piece of information left me concerned. As the clock nears midnight, I simply can't keep my eyes open and I begin setting alarm clocks.  Recently, my son came in around midnight smelling of a perfectly baked triple tiered sweet 16 cake.  Knowing he was home safely, I rolled over, turned off the alarm clocks and returned to REM sleep.  About twenty minutes later, he woke me again to inform me he was going to the movies.  "Movies are fun.  What a great idea!" I thought, in my half awake haze located somewhere between reality and dreamland.  As my son and friends were headed out of the door, my mind kicked in and I remembered that the theater was fifty miles away and it was already after midnight.  Those kids just think I sleep through all of this.  Needless to say, nobody went to the movies and I returned to my bed with a house full of children trying to figure out what to do next.

I now realize that they were up the rest of the night, based on the evidence strewn from my kitchen to the pool house and the teenage boy asleep on my couch whose name I don't know.  I think you have to look for blessings and I should be glad that it wasn't a teenage couple on my couch.  It can always be worse, you know.   Deciding coffee would make a wonderful addition to my morning,  I headed to the kitchen, but it appears that one of my children was the self appointed coffee barista last night as the bag of grounds was empty and the frappe machine was still humming a low sound of overuse.    When I was my kid's age, we had the hand-crank Snoopy Snow Cone machine with off-brand Kool Aid mixes. Nowadays, these kids are downloading instant coffee beverage recipes and blending up mixtures of caffeine and confections surely to keep them wired long enough to cook all the frozen pizzas in the house.  Is this the entrance ramp to the path of destruction, I ask!   I suppose it could be much worse.

As my children sleep uninterrupted, I'm left with the following morning beverage choices, none of which I find appealing...   the bottom of a bottle of Mountain Dew Black (I think you can boost your car's mpg rating with that stuff), the last of a gallon of room temperature milk left on my counter from last night, or some lemongrass black tea obviously purchased by me when I thought I would try this healthy vegan eating thing that lasted about three days.   My mother lives down the street and I could grab the dogs, walk over with them, dig out my old Snoopy Snow Cone machine and make some double raspberry snow cone drink.  Or.... there is the McDonald's drive thru!

Posted by Family Feathers Author at 8:51 AM