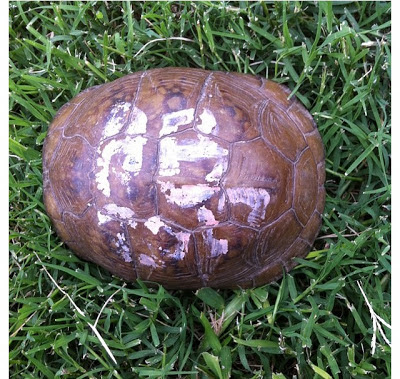 It is a small world, even to turtles.  On a lazy summer day in 2012, one Allie Brodnax found a box turtle and a discarded can of enamel paint.  She quickly painted her initials and date on the turtle’s shell and enjoyed his company for a short time.  We have a rule that no one is allowed to keep a lizard, turtle or other wild creature more than three days.  At that time, the visitor is returned to the wild.  Gilbert, as this highly decorated turtle was named, bid farewell and headed off towards the woods.
A year later, on the other side of town, across two highways and several major intersections, Gilbert made his way into the yard of a young boy who discovered Gilbert’s faded message on his back.  A picture was taken and Gilbert made his debut on Instagram.  Four hours north of here in the land of Wal-Mart executives, a distant friend saw the post and recognized the letters “AB” on the back of Gilbert’s shell.  She quickly posted to all that the faded message said “AB 2012” for Allie Brodnax.


It was a rainy, stormy day, when the young boy with the newfound turtle received a message from a my child that said, “Please Get Gilbert Out of the Rain.”
I never knew a turtle could travel such a distance.  With algebra not being our strong suit, we attempted to do the math to figure out a comparable scale of how far the turtle traveled in turtle miles.  We think it was much like walking to Asia over the course of a year.  In that time, I’ve seen many turtles in the road and even stopped to pick up a few.  I hope Gilbert is released in three days and continues his journey.  Nothing would be more exciting than stopping to save the next turtle and discovering “AB 2012” on its back!

Anonymous said…
Aesop would be proud of Gilbert's steady and true pace.