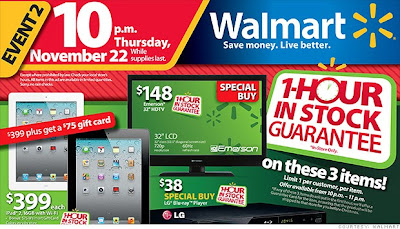 The Black Friday madness is on and I have to admit that I love every minute of it.  From mapping out quick exit strategies to determining who has the best electronics, it is a treasure hunt that I simply can't resist.  While I have no need for a 50 inch tv or a waffle maker, I find joy knowing they could be mine if I'm willing to wake in the pre-dawn hours and stand in long lines.  I've met some of my closest friends while sitting on the floor at Wal-Mart waiting for the iPads to be distributed from the pharmacy like some kind of controlled substance.

Social Media has added a new element to this game as we upload and compare "selfies" of each other holding oversized electronics or laying across the last Dyson vacuum cleaner in the store.  My friends and I can instantly message one another about inventory updates and alternate travel routes that will get us where we need to be long before we need to be there.

While my husband sits in a deer stand in the quiet of the woods, my friends and I are the true hunters the day after Thanksgiving.  We need no scopes to lock a pair of leather boots in our crosshairs from 100 yards away. Proudly, I can spot a discount panini maker from the opposite end of the store.

Just as there are various hunting seasons for deer, duck and grouse, some retailers have divided Black Friday into different "events", each with their own set of discount goods.  It has added a new element of confusion as one never wants to make the mistake of trying to purchase an out of event Blu Ray Player.  Your timing must be spot on for the true discounted price.

Much like my husband who pre-hunts and teases the deer with corn and promises of happiness, I've been known to walk the aisles of Wal-Mart hours before the sale to accurately determine the pre-positioning of Price Buster goods intentionally placed where least expected. Imagine the joy of finding a 40 inch tv in the frozen goods section.  It's better than a ten point kill.

The best purchase I've ever made was a 32 inch television for $99.  With the $75 gift card received from purchasing the iPad, the cost went down to $24.  Because I waited too long to pick up my pre-purchased item, there were none to be had and the only thing left was a 42 inch tv valued at $499.  With an "in stock" promise and an additional $5 coupon applied, my cost for unexpected happiness was $19. The personal satisfaction was similar to the joy realized the year I squeezed an eight foot Christmas tree into a six foot car and nobody lost an eye.   When you happen onto a musical tree that can play Canon in D major, you're certainly not going home without it, even if someone must ride on the top of the car to get there.

Black Friday madness causes me to cast physics to the wind and I'm known for procuring items that are much too heavy for a five foot tall woman to pick up.  Sadly, against his will, I've drug my husband into the crowds for much needed logistical support  One would think they would build a shopping cart large enough to carry two trampolines at once.  The biggest purchase ever made was the air hockey table that was larger than the room it was to go in.   Black Friday just makes everything bigger and brighter and one naturally assumes there is room in their world for such bargains.

As my children have grown and I've discovered life is actually simpler without electronic juicers and hot irons that can shape a piece of French toast to look like Mickey Mouse, I have nothing I really need to buy.  My daughter, however, has her own list of needs and spied and ad for ball gowns for $100 each.  So, this year, instead of battling for kitchen ware, we will be mining for evening wear.  Somehow, I don't expect the lines to be quite as long, but the fun will be just the same.

I salute my fellow hunters and huntresses and look forward to the day after Christmas when we can do it all again!


Posted by Family Feathers Author at 5:54 AM