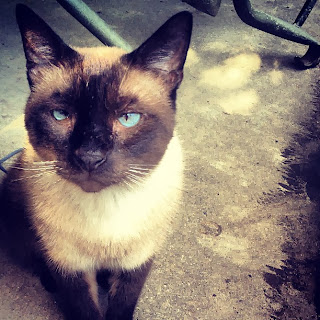 A smooth talking cat who says nothing at all
Yet tells the whole tale with a swat of a claw.
A testy old thing with a patch on his side
Where an ill-tempered fox took a bite of his hide.

A Siamese kitten, now aged in years
Rules the roost like a king whom everyone fears.
Homey, the cat, with blue eyes so deep
Picks the most inconvenient places to sleep.

His favorite one being the top of my head
Once I snuggle down deep in my comfortable bed.
I wake in the night to a soft, rhythmic purr
Of my sweet, sleeping cat who's missing some fur.

With the swoosh of a tail and a paw on my chin
His tail bats my face each time he breaths in.
In a half conscious manner, I hold down that tail
But it just keeps on swooshing ‘til I finally yell

And disrupt his dreaming of mice and great things
And up from my head, Homey cat springs.
With one eye half open and an indignant shrug
He gives me a look that is hateful and smug.

Tossed from his napping and removed from my bed
He’ll decide it is time to be watered and fed.
There’ll be no sleeping for anyone now
As he turns up the volume on his cat’s meow.

Louder and louder he’ll sing his song
Calling for tuna until I come along
In a half conscious fog from a sleep that was deep
Serving up cat food when I should be asleep.

Homey the cat gets whatever he likes
Because everyone knows that Homey cat bites.
He’s king of the castle but I wonder, yet…
Who’s really the owner and who’s the pet?
Posted by Family Feathers Author at 10:50 PM