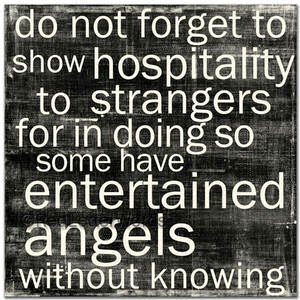 They say we entertain angels while unaware and because of this I want my children to know they have a duty to help when called upon.  In sixth grade, I failed to remember this and it took me twenty years to right my bad choice.

It was at McNew's Pharmacy, a small drugstore and soda fountain tucked in the north Georgia mountains where students gathered after school for a snack and some fun with friends.  We could cram ten kids in a booth designed for four.  There was no shortage of laughter and fun. Peer pressure, however, is a powerful force, and to a young twelve year old girl who happened to be the new kid in town, it was important not to be different from the others.

It was while we were dining on french fries and milkshakes, that a man walked in with a small box of pencils and handed our group a sign he had made.  The words on the sign seemed foreign to us as we read that this man could not speak or hear.  Mind you, this was the 70's and children in the south were not mainstreamed, so we really didn't know how to act around a person who seemed so very different from what we were used to.  He was selling his pencils to earn a few dollars that probably would have bought him dinner that night.  A small act of kindness could have gone so far.

A group of kids, with plenty of change in their pockets and plenty to eat, pushed the pencils away and laughed.  I don't really remember if we were laughing at the man or laughing out of nervousness, not knowing what to do with this stranger who stood in front of us.   The man quietly took his pencils and his sign and departed.  The group of friends, who had no need for pencils, returned to their fun and laughter.

That night, my heart broke, not so much for this man, as for the fact that I had not helped when given the opportunity.  It was that perfect cocktail of guilt, compassion and regret that placed me before my mother to tell her of my wrong doing.  She led me to her car and we drove all over the small mountain town looking for this stranger so that we could give him money in exchange for the pencils he was selling.  Sadly, the man was gone and I did not get a second chance to help this stranger.  My actions were something I would have to live with.

God moves in mysterious ways though.....  move the clock ahead twenty plus years.  I was a young mom with a young son and an infant.  My son, now grown, still talks about the night the doorbell rang and his mother lit up with joy to find an old man standing at the door with a box of pencils in hand and sign around his neck indicating that he was deaf and mute.  I did not see the same thing my children saw.  My joy sprang from the fact that I saw my second chance. While it couldn't have been the same man from the mountains, I knew I wouldn't make the wrong decision twice.

I'm sure the man wondered why a woman with two small children needed so many pencils, but he seemed just as delighted as I bought every one.  My son asked why pencils made me so happy and I told him the story.  After the man left, I ran back to the door to see if there was anything else I could do and he was nowhere to be found.  I looked up and down the street, but he was gone. Perhaps this was an angel.  Maybe it was the same man.  I'll never really know, but my child remembers quite clearly, how the act of giving brought me so much happiness.  I know without a doubt, that when an angel or a stranger appears before my children, in whatever form, they will do the right thing and any laughter will be born out of joy, not out of ridicule of that which we don't understand.