Vanity Is A Funny Thing 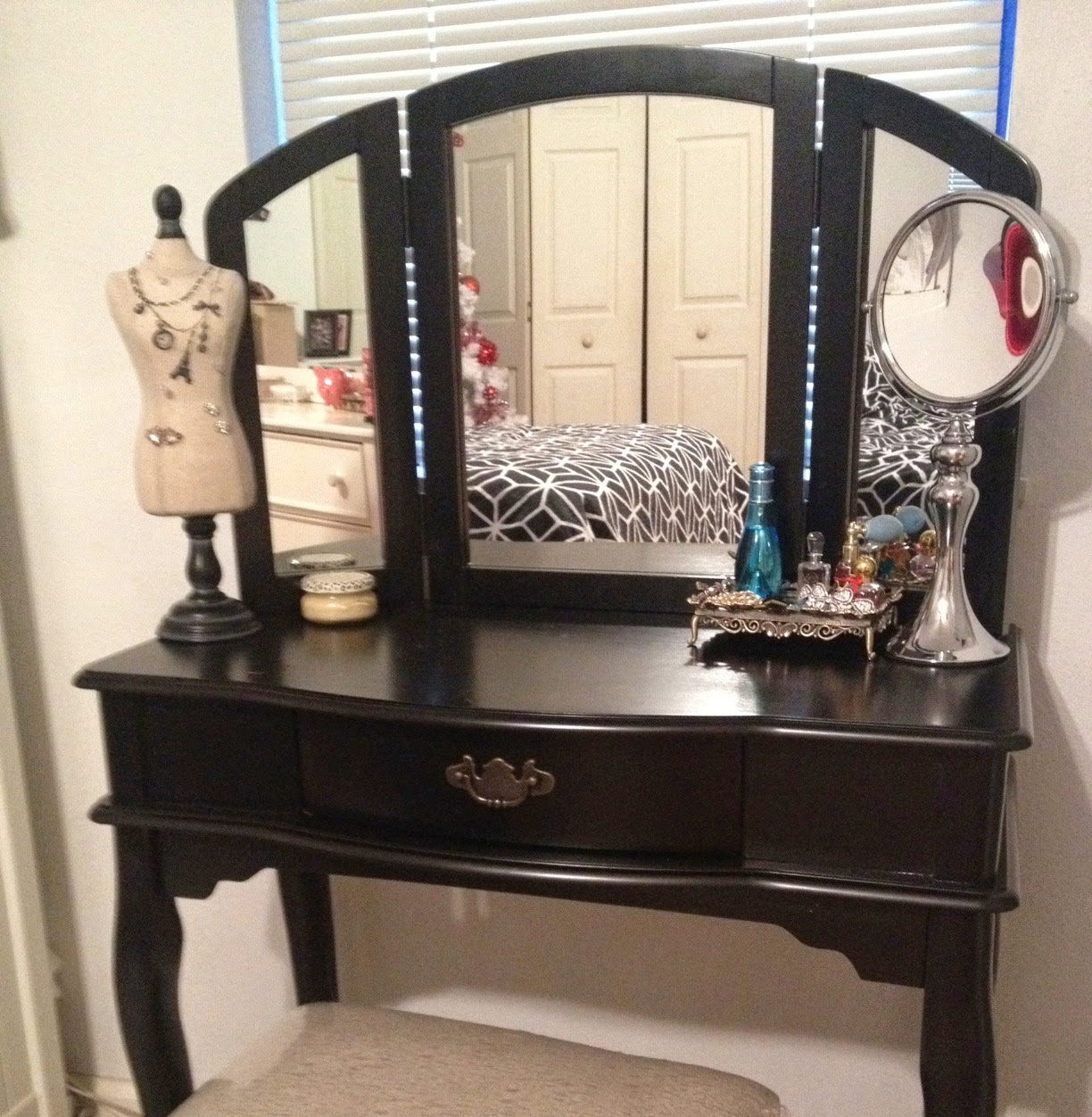 My daughter wanted a dressing table for her bedroom for Christmas and it was ordered long before the Christmas rush and safely stored in our garage.  You can imagine my shock when we removed it from the box, just days before Christmas, only to learn that it was the wrong item. The outside of the package clearly showed that we had received the white, five drawer unit that actually matched her furniture.  Sadly, the tiny black vanity would have to do until the correct one arrives.

As Christmas morning was only a few hours away, I asked my husband to move the vanity to the back door so we could easily bring it in after all were in bed.  I learned, after the fact, that you should not tell a young girl, on the cusp of driving by herself, that she can't go outside on Christmas Eve.  While I was trying to hide the likes of a dressing table, I never realized that my child would interpret this to mean that there may possibly be a new car out there.  She contained her excitement, yet lay in bed all night dreaming of the shiny black jeep that certainly awaited her.  Little did she know, it was only a shiny black dressing table.

The next morning arrived and she flew to the Christmas tree with great excitement.  I should point out that giving someone a new key chain is a two part gift and it should never be given simply because it's a pretty key chain.  Unless there is a car that goes with such a gift, a key chain is a really bad gift idea.  I was completely unaware that my tiny beauty, sitting by the tree smiling at her new key holder, secretly clung to the idea that there was more we weren't telling her.

As the morning closed and we rested back against a backdrop of discarded wrapping paper and boxes, I never saw any sign of disappointment from my child.  She basked in the joy of the tiny dressing table and the many sweaters, boots and scarves that she had received that morning.

My joy was found in the new TV I received that would replace the outdated analog unit in our bedroom.  It had all the bells and whistles and could do everything short of launching spacecraft.  Sadly, I learned that it could not pick up cable TV channels.  You would think this would be something they would plaster on the front of the box in large print.   I've got Pandora and Netflix and can even send messages through Facebook on my TV, but I can't get the news or the weather.  My disappointment matched my daughter's, yet neither of us knew, as there were too many other things to be happy about.

She spent much of the next day reorganizing her room to accommodate the new vanity and I tried in vain to pull channels out of the air.  We both learned to adjust our expectations and found we actually liked the gifts we had.  When the new vanity arrives, I will probably send it back as the sleek black unit works quite nicely.  Next Christmas, I will learn to read what's in boxes and be better prepared.  Nothing will be hidden outside unless it has four wheels and requires a key to operate.  While this Christmas was not the right time for a new car, the little vanity will go a long way in bringing happiness.

Posted by Family Feathers Author at 10:34 AM