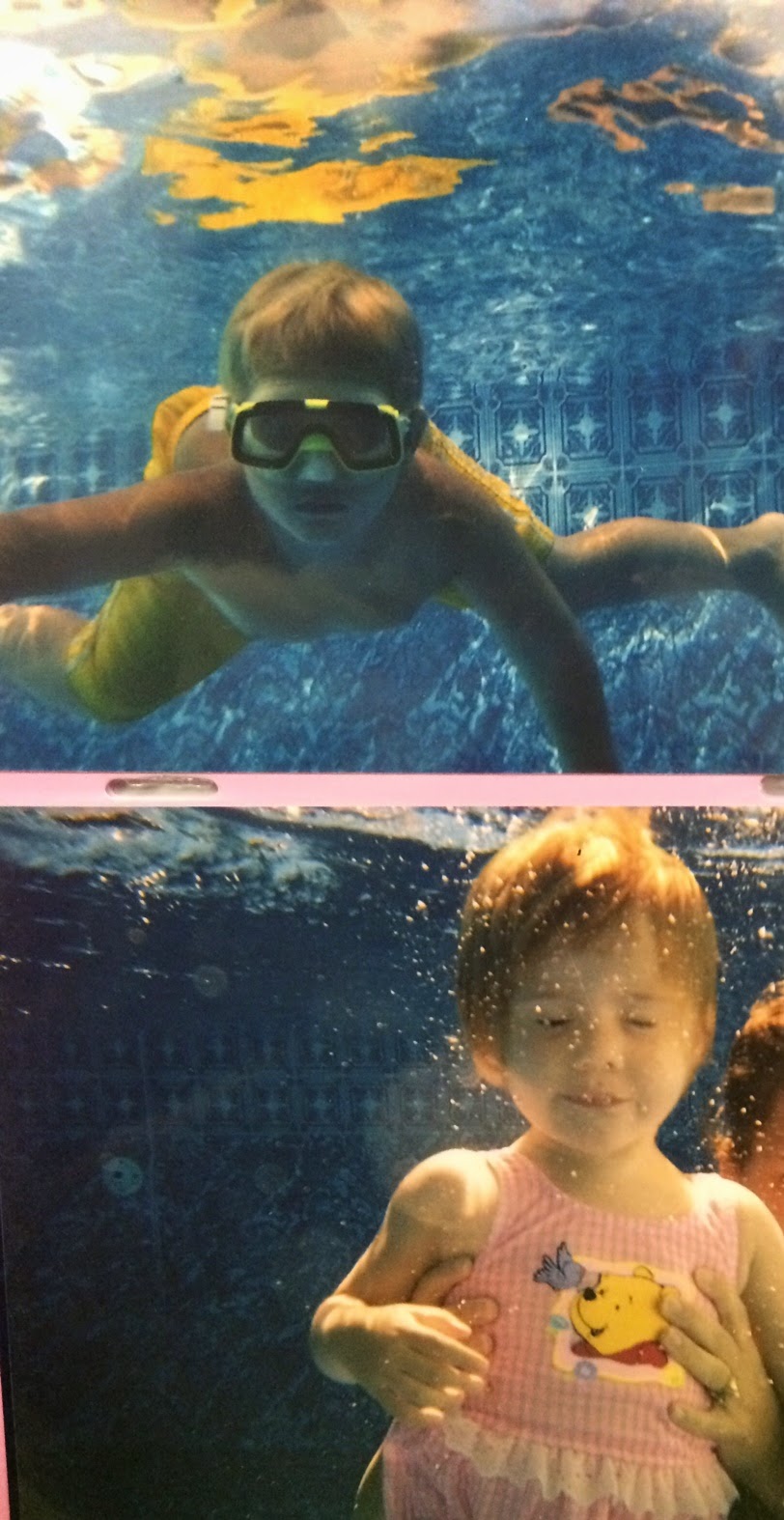 From the time my children were only a few months old, they were taken to the pool where they were gently placed under the water and somehow, with some miraculous protection from above, they opened their eyes wide and began to naturally move through the water.  Perhaps it was genetic memory.  Perhaps it was dumb luck, but those babies could swim and had no fear of going under the water.  As I stood at the edge of the pool, nervously praying for their safety, my husband would cradle these tiny swimmers in his palms and gently blow a puff of air into their face.  Instinctively, they would inhale and that is when their underwater adventure began. I had seen it before and I knew exactly how it would occur, but the thought of placing a baby under water is more than a young mom can bear. Those underwater babies became powerful swimmers and our hearts swelled with pride as we had taught our children well.

As toddlers, they could jump in and swim back and forth across the pool.  Other families looked on in awe, as these tiny children had no fear of the water.  The problem, that we did not notice, was that they were skilled underwater swimmers and knew nothing about the top of the water.  Somewhere along the line, we forget to teach them about the breaststroke or the butterfly, because it was obvious they could cross an Olympic size pool with no problem and we were comfortable with the skills they had.

The first realization that I may have forgotten a key part of the swimming program was when I entered my son in a summer swimming contest.  At the age of six, he eyed the lanes wondering what the black lines were for.  I was unaware that his view of the pool had always been from under the surface.  The children lined up with one goal of crossing to the other side.  I knew my dolphin child would excel at this race across the pool and I had already cleared a spot on the shelf for his trophy.  When the whistle blew, the children dove in and traveled in perfect breaststrokes down their lanes of pool traffic.  My son swam straight, about ten feet, disappeared under the water and took a hard left across the lanes.  He came up only to realize he was headed in the wrong direction.  He took a breath, reached across the water with arms wide open and sank back down under the now empty lanes of swimming children.  I knew we would never make it to the other side without some lessons on top water swimming.

Ten years later, my daughter enrolled in lifeguard certification training.   She’s tiny, but she’s solid muscle and I knew floating might be an issue, as she has not an ounce of fat to help her float.   At the age of 50, I’m perfectly suited for bobbing in the pool with drink in hand and never having to actually move my feet.  I wished her luck and left her at the pool.  I had, once again, forgotten that my children were underwater swimmers.   When she texted me and told me she had to swim ten laps, I could only imagine a dog paddling girl flailing her arms in every direction, swimming directly into those who were making their way back and forth across the top of the pool in straight lines.   It didn’t take her long to realize that the kids wearing the suits, which read “Swim Team” had skills, she did not possess.  These kids moved in unison as they flew across the pool, hitting the wall with their feet in perfect underwater somersaults that catapulted them halfway across the pool for their next lap.  My dolphin child employed her underwater swimming skills to knock out the ten laps with ease and only broke the water a handful of times for a breath of air.

So, this summer, when I challenge my children to swim laps across the pool, they will have no idea that I’m secretly trying to squeeze in a chapter on swim lessons that I apparently forgot.    The breaststroke and the butterfly are definitely in our future.
Posted by Family Feathers Author at 8:21 AM