Start What You Finish 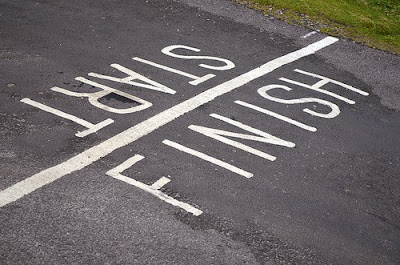 It goes without saying that good parents teach their children to finish what they start.  My own children have discovered how difficult this can be, just days after receiving their soccer jerseys and realizing that soccer wasn't what they wanted to do.  They have completed a season on a team, giving their all, even when they did not enjoy that which they had signed up for.  It's a life lesson that will carry them far.

My son was only six years old when he landed a solo in the school play.  He had practiced and practiced and had his three minute song memorized and perfected.  As luck would have it, a seasonal cold left him hoarse the day before the play. He reserved his voice, communicating only with finger points and head nods, in an attempt to heal his vocal chords in time for the big event.  There was a morning practice and an afternoon performance.  He made it through the morning with only a few crackles in his voice.  When afternoon came, and the auditorium was filled with proud parents, my shining star stood at the top of the stage and began belting out his solo.  The first few words were beautiful and delivered in perfect pitch.  And then it came, the harsh crackling of a voice being torn from the performer and suddenly, no sounds came out.  Had I been in his position, I'm not certain I wouldn't have left the stage and hoped that the director would move to the next scene.  It was first grade after all.  No parents would have judged him.  Instead, that tiny child with the once big voice, continued to sing without sound and never missed a word.  A stunned audience watched as a child moved forward, finishing what he had started, delivering a silent performance worthy of a standing ovation.   I could not have been more proud of him.

My daughter, an outstanding gymnast, who spent the most part of her early years upside down in half twists as she catapulted herself from room to room, has also lived this philosophy of finishing what you start.  After years of gymnastics and after school practice, five days a week for long hours, her twelve year old bones began to creak and pop.  On a grey November day, she shared with me that she was tired.  This wasn't the kind of tired that a nap can cure. Her body was tired.  She finished the season and finished what she had started with the completion of the Spring program on a Sunday afternoon in May.  It was, indeed, a grand finish.

I've taught my children to do these things, and yet, I find myself in a quandary, unable to start what I have finished.  Let me explain.... I've written a 25,000 word book that has been finished for over two years.  The ending is great, but the beginning keeps changing.  It has changed shape and form while the characters come and go.  Edits are made and just when I think the beginning is good, I change it all again.  I've finished what I started, but I can't seem to get the start right.  And then.... I gave up.  I shelved it.... left it in a digital folder.  Had my children quit what they started, I would have placed them back in the proverbial saddle, put on that jersey, or cheered them on from the stands.  Perhaps I need a good dose of my own medicine.

My long lost book characters call to me from their digital silence and I find myself ignoring their call.  I should remember that I heard my child when no words came out.  Sometimes you need to listen even when you believe there is nothing worth listening too.  I suppose I should follow my guidance to my children and listen to what is calling me and truly finish that which I keep starting over and over again.

Posted by Family Feathers Author at 9:11 AM