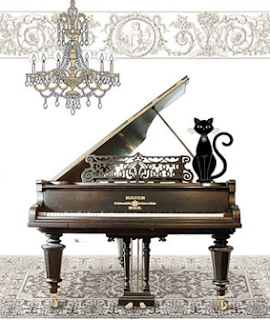 I'm surrounded by people who are musically gifted and somehow I feel cheated in that department. My singing is best used to calm crying infants who are unable to speak about my made-up lyrics sung in the wrong key.  My piano playing, up until now, has been atrocious at best.  I have one song memorized and after 30 years, nobody really wants to hear Fur Elise again.  When the kids are sitting around playing guitars and singing their latest original works, jumping in with an early classical Beethoven composition just doesn't work.  It's a mood killer of greatest proportion.

None of these children have taken a music lesson so I wondered how they could play so well when I, who sat for years in Mrs. Perry's den, counting out notes on her piano, can not. They all play by ear.  This concept has always baffled me as I can't understand how someone can just sit down at the keys and "hear" the right notes.  Things just don't work that way.  But, now after fifty years, I may have stumbled on to what my children already know.

In the Google Search Bar, I typed, How To Play Piano.  Dozens of websites popped up.  It didn't take long to discover that chords were the missing link in my non-piano playing world.  I quickly memorized the major chords, then the minors.  Patterns emerged and suddenly things started to make sense.  Chord progressions popped up in my next search and before long I played an actual song with four chords.  It felt wonderful. It felt natural and my fingers seemed to know which notes to play without much thought.  My hands flew up and down the keyboard and I realized I was playing by ear.

I called my children and serenaded them against their will as we talked on the phone. My son suggested I try YouTube for further tips and later that night I was playing cocktail piano alone in the den in my pajamas.  It was liberating!   I attempted singing with my playing but was unsuccessful finding the chords to Michael Row Your Boat Ashore or Hush Little Baby. Perhaps these are only popular with babies in need of a nap.

As my skills improve, I've employed the use of the pedals and the volume of my playing increases with each crescendo and fades off when a diminuendo nears.  I sound like I actually know what I'm doing until that last note arrives.  Every time, as if some piano curse has been placed upon me, I hit the wrong keys on the final note.  There is nothing quite like mesmerizing your audience, two cats and a sleeping dog, with a great piece of music and then destroying it on the final note.

I move like Liberace up and down those keys playing Moon River and Hallelujah, but when that final note arrives and my fingers pound down on the wrong keys, I'm back in Mrs. McArthur's den, sitting under her scolding eyes as she says, "Did you really practice?"  I can finally say, "I'm playing by ear, woman!" Even as the deafening sound of the wrong chord echoes through the room, I'm not defeated because I can now play dozens of songs without reading a single note. Move over Beethoven, there's a new kid in town and Fur Elise is on the shelf.