The Little Woman At the Edge of the Wood 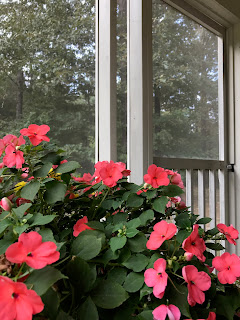 As the night sky politely gave way to the morning who stretched and yawned and filled the sky with her glowing pinks and soft orange colors, the world at the edge of the wood began to wake up.  Rabbit in his tiny hutch nudged the other bunnies right out of their bed as he, too, stretched and yawned and reached much farther than the corners of his bed.  As he lay there, all stretchy and warm, he listened through sleepy ears for the soft rain of sunflower seeds and dried corn that sprinkled down on his house each morning.

It was the little old lady who lived at the edge of the wood who made sure rabbit and friends had plenty to eat.  She came to her porch every morning as the sun rose softly above the pine trees and reached into a bucket of seeds and grains, scooping up a cup of breakfast for the animals who lived near.  The porch door would creak as she stepped outside and with all the might she could muster, she would toss the seeds into the woods where they fell down softly on the forest floor.

The blue jays were always first to come to dine. Before rabbit could make his way out of his hutch, the pesky blue birds were buzzing this way and that as they gobbled up as many seeds as they could.  The bunnies came in pairs and sifted through the sunflower seeds looking for tiny pieces of corn or carrots that tasted so delightful.  There were always good things to find in the morning.

The little lady loved her woodland friends.  She sat in her rocking chair and watched them as they all came to eat with one another.  She laughed as the blue jays fussed at everyone for she knew they had frightfully poor manners.  The squirrels did not care for the selfish ways of the blue jays and would shake their tails in objection as they nibbled on the morning treats.  The bunnies were the old woman’s favorite, for they were quiet and kind and shared politely, the way friends should.

One morning, as the purple night sky turned to pink, rabbit yawned and stretched, but he did not hear the pitter patter of seeds falling into the wood. He yawned and stretched farther as he thought it could be too early.  Rabbit was not early, though, and the morning bounty never came. The blue jays were first to arrive to find the forest floor empty of seeds and good things. They paced around with heavy steps, wings on their sides and noses in the air, most displeased with this turn of events. The bunnies arrived and stood together wondering why breakfast was not there.  The squirrels ran about, shaking their tails as they looked for seeds or grains or berries, but none were found.  The animals gathered together and sighed a heavy sigh.

Many mornings passed and there was no creak of the porch door.  There was no seed scattered on the forest floor.  The little woman no longer sat in her rocking chair smiling at rabbit and all his friends.  On the fifth day, when the night sky had disappeared completely, rabbit sprang from his bed and called for the birds and the squirrels and all the bunnies. It was clear to them all that something was wrong.  The squirrels climbed to the windows and looked inside for the old woman.  It was there that they saw her sleeping in her bed, even while the sky turned the brightest of blue.  The woodland animals watched as new people came and went, but their friend continued to sleep as the days went by. Mornings arrived and then night pushed the bright sky out of view. The old woman slept through the days and nights and no seeds fell to the forest floor.

It was rabbit who decided what must be done.  He called for the blue birds, the squirrels and the bunnies. They crafted a plan to help the little woman.  They each knew what to do and would meet again the next day as the morning sky stretched and yawned.  Rabbit scurried off to the apple orchard.  The bunnies gathered wildflowers that grew near a pond and the blue jays wove sticks together as they did when they made their nests.  The squirrels gathered pecans from the grove by the wood.

The next morning as the pink and orange sky gave way to good things, a bounty from the forest was left on the old women’s porch.  Rabbit left a basket of fresh apples.  The blue jays brought a wreath they had made of grasses and twigs and hung it high on the porch door.  The bunnies placed wild blue irises and morning glories in a jar on the porch.  The squirrels left pecans in a bowl by the door.  It was their turn to give back to the little woman who had fed them all every morning for so many years. Day after day, the animals brought fresh fruits and flowers to the little old woman in hopes that it may wake her from her sleep and bring her happiness.
Rabbit lay in his bed one early morning, dreaming of the apples he would deliver that day when he woke to the soft sounds of seed falling into the wood upon his house.  He sprang from his bed, causing all the bunnies to roll to the floor, and ran to the edge of the wood to see the old woman standing on her porch.  The blue jays had not arrived yet and only rabbit and the little old woman stood there in the clearing.  They both smiled and their hearts filled with warmth as they both knew what each had done for the other.  The little woman sat in her rocking chair as she waited for all of her friends to arrive.  They each came and enjoyed the seeds and grains and tiny vegetables that waited for them.  As the sky turned from pink to blue, the little woman held a shiny red apple close to her heart and politely whispered thank you to rabbit and all.
Posted by Family Feathers Author at 9:25 AM No comments: