Merry Christmas to All and To All a Good Night...... 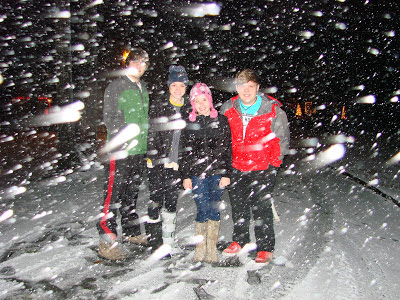 When it snows after dark in a community that doesn't often get snow, kids will go to great extremes to have fun.  As the giant snowflakes fell on Christmas night, my kids raced out into the cold in an effort not to miss a good time.  It's a sure sign they are having way too much fun when your teenage daughter is towed home in her golf cart by "the cute boy" down the street, dragging a tiny wheel and more friends behind her. 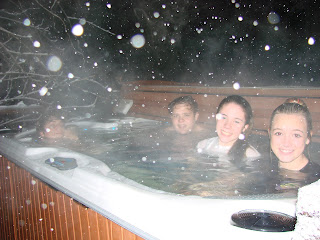 My kitchen was turned into a staging area for wet boots, dry towels, frozen children and hot chocolate.  The kids beat a path back and forth to the hot tub until about two a.m.  With the steam coming up into the night air and nothing but the kid's heads above water, it looked like they were basking in a big vat of soup.  Leaving them to simmer, I made my way to bed around midnight.  I could still hear the sounds of giggling kids echoing through the house.

About 2:30 a.m., my son woke me and said, "You know how you've always told me to wake you if something cool is happening and you don't want to miss it."  While I was referring to events such as  an alien take-over, a re-run of The Walton's Family Christmas special, or some child crafted crisis quickly spinning out of their control, I had no idea what "cool" thing was occurring in the middle of the night and had to get up to see.   With great detail, my son explained how the street lights were reflecting on the snow and everything outside was reflecting light making it appear to be daylight in the middle of the night.  At 2:30 a.m. I donned by still wet snow boots and a jacket and wandered out into the cold with my son expecting to see this great light beaming through the night.

We walked outside and all appeared normal to me.  My son was in awe of the orange sky and the glistening trees all reflecting light across the neighborhood.  We stood there together in the middle of the night just looking out into the world.  I have seen the snow light up the night many times and it is beautiful.  I suppose my children have not seen this as much as I have and I am glad that they noticed.  As I stood outside with my son under the orange sky, by a steaming hot tub, looking out into the semi-dark street,  I wished that I could take him back to 1972 to the small bedroom window that I once peered out of, to watch in awe how the snowy night glowed and the streets lit up like Christmas. It is a beautiful sight to behold whether you are eight years old with your nose pressed against a window or you are 48 standing there in a robe and snow boots.  I'm glad my son noticed the magic.  I'm even happier that he woke me to join him.

So, it was a White Christmas in our southern town and that doesn't occur but about once a century.  We grabbed as much life from it as we could, and sometime before the sun rose, we all collapsed in our beds from our dreams of a white Christmas.

Anonymous said…
The best memories in life come at moments unexpected. Your son's excitement for nature's snowy artistry in the glow of a neighborhood streetlamp was certainly worth waking for.
December 28, 2012 at 10:47 PM